Lucas Alexander-Crichton CA: 'Businesses must encourage their employees to bring their whole selves to work'

Lucas Alexander-Crichton CA, Audit Manager - UK&I Assurance at EY, discusses his journey of self-realisation, the stress of hiding his authentic self and the importance of being an ally.

When did you begin to have an awareness that you were gay and what was that experience like for you?

I always had an awareness that I was ‘different’ to the other boys at my school, which is quite a common theme that you find from guys who identify as gay. Something that frustrates me to this day is the extent of sex education that younger people receive in school. It severely lacks the much-needed discussions on same-sex relationships, the LGBTQ+ community, as well as the variety of experiences and feelings a younger person goes through and feels. When I was at school – I wasn’t educated in any of these areas which is unfortunate. I do hope that we begin to see real change in this.

Having grown up in rural Aberdeenshire, there were not any LGBTQ+ role models that I could talk to, look up to, or to even witness what being a member of the LGBTQ+ community was like for them. Being gay wasn’t discussed at all. I had the self-awareness that I was different, and the feelings that I was experiencing were different, but I wasn’t aware of what this actually meant.

Have you ever been in a position during your work life where you have felt that you were unable to be your authentic self?

There was a time when I did hide my authentic self.

When I first started out in my career at EY as a school leaver, I was aware that I was entering a new environment and effectively starting from a clean slate where nobody knew me. At that time, I wasn’t out, and I was still unsure what it was that made me feel like I was different. Unfortunately, I became quite reclusive and very protective of my private life when I first started work as I had been bullied, taunted and teased at high school.

I began to ‘turn in’ on myself and was frightened of being in a situation where I might be asked ‘Do you have a girlfriend?’ which happens all of the time in the working world! It was a really challenging time for me as I was beginning something completely new, working full-time in a professional firm for the first time, and trying to focus on my CA training. All of this was going on when I was actively trying to hide my authentic self – partly, also, because I was still unsure of who I was.

The questions I was asking myself at that time were weighing me down. My mum is the loveliest woman in the world, and she and my entire family did completely accept me when I came out, but at the time, I was asking myself, ‘What if I come out to her and she says she never wants to see me again and disowns me?’. These were all irrational fears on my part, but questioning what the impact would be for me, and those around me, if I did come out, was something that I had to deal with. The energy that this takes out of you is overwhelming and it does really impact on you at work – it does not allow you to demonstrate all of your qualities and abilities.

But, on the first day of my ICAS lectures, I met a guy called Michael who was a gay man from Dundee – also starting his CA training. The other three school leavers and I, from EY, befriended him, and I could see that it wasn’t just me that was getting on well with Michael, but the other two, straight, school leavers were also getting on well with him. This was the first time that I really witnessed the fact that it was OK to be gay and that not everyone will treat you differently. It was also the first time in my life when I had someone who I could talk to and with whom I could ask questions about what it was like to be gay. He helped me gain more of an understanding of myself, and I began to develop feelings for him. This was when I was finally able to understand that I was gay.

Over time, I understood that the feelings I had for Michael were mutual, and we began a relationship. However, I was still unsure about the reaction I would receive at work, or from friends and family. Eventually, however, with Michael’s support, and the abundant support I received from my mum (who was the first person I came out to) I did come out. I was 18 and did the standard thing that someone of my generation would do – I posted on Facebook that I was in a relationship with Michael, who is now my husband! At one instant time – everyone knew. When I went to work that Monday, no one batted an eyelid, and everyone was so pleased for me.

This was a huge moment in my life, and I cannot describe to you the feeling of relief. All of this anxiety, stress, worry, just disappeared. I was able to be myself and be confident in who I was. After this, I began to perform better in work, I made more friends at work as I was able to be personal and show people who I actually was without trying to hide anything. Since then I have gone from strength to strength and I have been involved in a number of wonderful things at EY – Unity, EY’s LGBTQ+ network, being one of them.

How have you seen the landscape change in business for those who identify as LGBTQ+ over the years?

When I first came out, I’d still be asked if I had a girlfriend and I was pretty nervous to say ‘Well, no, I have a boyfriend’. Normalising gender-neutral terms such as ‘partner’ instead of girlfriend or boyfriend is something that I have seen getting better since I first started, but still an area that could be better.

Where I’ve also seen development is people starting to have open and honest conversations around the kind of language to use and what is appropriate to say. I hate to think that people are scared to have a conversation around these kinds of topics because they are afraid that they may say something that might offend someone. Normalising these discussions, and not being afraid to ask the difficult questions, and getting to a place where people feel comfortable to ask such questions is so important and is an area where I’ve seen improvement.

You’re part of Unity, the LGBTQ+ network at EY. Can you share some insights into the type of issues and work you focus on through that group?

Unity in the UK was founded in 1995 (making EY the first professional services firm in the region to support this type of network) and has over 600 members across all our UK offices. I am the Scotland Co-Chair for this network.

We are always trying to come up with new suggestions around how our people can support their LGBTQ+ colleagues. As an example, we are exploring new ways in which we can help gender-fluid colleagues feel like they belong at EY, such as looking at whether it is possible to create two access passes that they can use depending on what they feel most comfortable with. If one day, they felt more comfortable identifying as their male self they will have the correct pass, and the same would apply if they felt more comfortable identifying as their female self.

These types of initiatives are so important to make people feel comfortable in themselves, but the very existence of a support network like Unity cannot be underplayed either. Those in the LGBTQ+ community do face challenges that may not affect, say, a cis male. Issues such as acceptance from others and self-acceptance are so prevalent amongst the community and having a network where you can just meet up and feel supported is so important.

I’ve also had a number of my straight male colleagues approach me to ask how they can support the Unity network, and this is absolutely fantastic. Being an ally by always calling out bad behaviour and supporting all of our colleagues – no matter who they choose to identify as – is so important, not only in work but in life.

As a profession, accountancy is a relatively safe environment, but we must never be complacent and there is still a long way to go until we have full, true, and unequivocal equality. 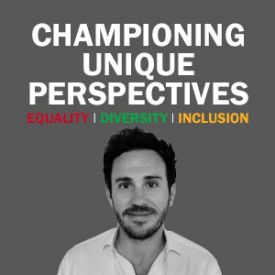 Matthew Halstead CA: Silence around mental health and suicide is no longer an option 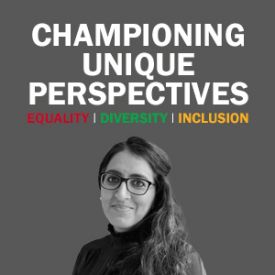