ICAS will participate again in the Fraser of Allander Institute’s ‘Scotland’s Budget Report’, to be launched on 12 November, but Donald Drysdale notes that the dates of the UK and Scottish Budgets are now uncertain.

The UK Budget, which had been planned for 6 November, will not now go ahead. There is to be a general election on 12 December, so it seems likely that the UK Budget will be delayed until January.

My recent article, about how the delayed UK Budget will tax Holyrood, addressed some of the problems facing Scottish Finance Secretary Derek Mackay as he prepares to draw up Scotland’s Budget for 2020/21.

Mackay had planned to present his Budget to the Scottish Parliament on 12 December,  and no change to this has yet been announced. It would be unprecedented for the Scottish Budget to be brought forward before the UK Budget, but perhaps this will happen.

The purpose of this follow-up article is to explore two sources of information which may be of particular interest to those wishing to gain a more detailed understanding of the constraints against which the Scottish Budget may be prepared.

The Fraser of Allander Institute (FAI) is a leading independent economic research institute, focused on the Scottish economy, within the University of Strathclyde's department of economics.

Scotland's Budget Report is FAI’s annual analysis of the Scottish Budget. It discusses the state of the economy, the outlook for Scotland's block grant and tax revenues, and the policy options open to the Scottish Government as it prepares to set its Budget each year.

The next edition of Scotland’s Budget Report, looking ahead at the Budget which was originally scheduled for 12 December but I suspect may be postponed, will be launched by FAI at an event to be held in partnership with Deloitte, the Scottish Policy Foundation and Asianomics.

The event will be chaired by Graeme Roy, Director of FAI, and his colleagues David Eiser and Mairi Spowage will present findings of their research. Caroline Gardner, Scotland's Auditor General, and Charlotte Barbour, Director of Tax at ICAS, will provide their insights.

This free-to-attend briefing event will be held in the National Museum of Scotland in Edinburgh at 9:00am on Tuesday 12 November. Places can be booked online here.

Such an event would be incomplete were it not accompanied by an authoritative account of the state of the UK public finances, and this will be provided by Paul Johnson, Director of the Institute for Fiscal Studies (IFS).

IFS is an independent research institute, established with the principal aim of better informing public debate on economics in order to promote the development of effective fiscal policy.

Through the establishment of rigorous independent research – including its annual IFS Green Budget before each UK Budget, and its Post Budget analysis – IFS successfully takes debate about public policy to a wider audience and influences policy decision-making.

On 8 October the IFS published its Green Budget for 2019, co-edited by Paul Johnson. This report looks at issues and challenges which will face the UK Chancellor in preparing for the next Budget.

In addition to reviewing the global economic outlook and recent trends in the UK economy, the Green Budget sets out forecasts for the UK economy under four distinct Brexit scenarios.

A chapter is devoted to Conservative suggestions that the UK higher rate income tax threshold should be raised from £50,000 to £80,000, and that the point at which people start paying national insurance contributions (NICs) should also be increased.

IFS finds that these reforms would primarily help higher-income households. It examines other ways the government could cut taxes for high-income individuals whilst simplifying the system, and suggests a more targeted way to help low-earning families by raising work allowances in universal credit.

It explains that, if the UK higher-rate threshold was increased, the Scottish block grant would rise under the Barnett formula. Holyrood could then choose between increasing the Scottish higher rate threshold or using the additional funding for other purposes – such as alternative cuts to income tax or other taxes, or higher public spending.

The interactions of differing income tax and NIC policies north and south of the border had already been examined by IFS in a paper published in June 2019. This had flagged the electorate’s lack of understanding of the workings of the Scottish fiscal framework as a key problem.

The growing divergence between Scottish and UK income tax policies will be the key focus of Charlotte Barbour’s presentation at the FAI event on 12 November, and the subject of a chapter contributed by ICAS to Scotland’s Budget Report.

This chapter will ask whether Scotland will continue to set its own path – or whether UK tax measures, and the potential for radical Brexit-related tax proposals, will cast a shadow over the forthcoming Scottish Budget.

The direction of Scottish income tax policy and its distinctiveness were set in 2018/19 with the introduction of five bands. They brought a more progressive charging structure than in the rest of the UK, and since then the divergence of rates and thresholds has grown.

The Scottish government may stay with the 5 bands; however, any potential impact of the tensions and increasing costs for higher earners, relative to those in the rest of the UK, would need to be factored into tax policy decision-making. There is a risk of losing revenue, or an opportunity cost if inward migration is discouraged.

If divergence becomes more pronounced, tax planning by businesses and individuals is likely to play an increasing role in determining Scottish tax revenues. It may also affect productivity, whether this is due to mid earners not undertaking further work to avoid being taxed at a marginal rate of 53%, or because Scotland looks less attractive to those who might have considered moving to Scotland.

With income tax only party devolved, Westminster’s decisions on both income tax and NICs will also have a significant impact. The Scottish government will have tough decisions to make if it wants to raise funds, maintain divergent policies and satisfy Scottish taxpayers.

While income tax is likely to stay the key feature differentiating Scottish taxes from those elsewhere in the UK, the forthcoming Scottish Budget may consider other taxes which are already devolved, or which might be devolved or created.

Land and buildings transaction tax (LBTT) differs from stamp duty land tax (SDLT) mainly in respect of the rates at which it is charged, which have been criticised by some as excessive.

Air departure tax (ADT) was to have replaced air passenger duty (APD) in Scotland, but an opportunity for a distinctive cut in ADT rates no longer exists now that it would conflict with Scotland’s climate change policies.

VAT assignment had been recommended by the Smith Commission, but on closer examination it seems difficult to agree an assignment method and it has not yet been implemented.

New devolved taxes such as a transient visitor levy (TVL or ‘tourist tax’) and a workplace parking levy, are designed to drive behavioural change – and may impose burdens on business while raising minimal revenues.

In a short space of time the Scottish Government has established a distinctive tax regime, but it is one which is intertwined with the UK tax system. Hence there are considerable constraints, due in part to the politics that any government faces, and in part to the interactions between the Scottish and UK tax systems. Arguably, Scotland has access to only some of the fiscal levers it needs. 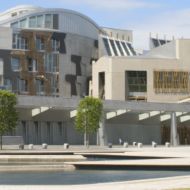