Gradual divergence of income tax rates in Scotland and the rest of the UK is one thing, but Donald Drysdale wonders whether the differences are about to become unmanageable.

As I write this, the UK is in political turmoil. Brexit is moving slowly, but the impacts of the uncertainties it creates are changing rapidly.

While the E27 have now granted the UK an extension of up to three months, and political parties at Westminster squabble about whether (and if so when) to hold a general election, a casualty is the UK Budget – which had been scheduled for 6 November.

Doubtless the new Chancellor of the Exchequer, Sajid Javid, plans to deliver his Budget as soon as he can. However, any delay in this may well have a knock-on effect on the timing of Scotland’s Budget for 2020/21, which was to have been unveiled on 12 December.

Former Chancellor Philip Hammond’s decision in 2016 to adopt the autumn Budget as a single major fiscal event each year was widely welcomed.

Significantly for Scots, this decision also helped in establishing a new Scottish budget process – the broad timetable within which Holyrood expected it would have to bring forward and approve the Scottish Budget for each succeeding financial year.

Scotland’s Budget relies heavily on the revenues from Scottish income tax, originally estimated at over £11.5 billion for 2019/20, and to a much lesser extent on its fully-devolved taxes – land and buildings transaction tax (LBTT) and Scottish landfill tax (SLfT).

Holyrood’s power to set income tax rates and thresholds to be applied to the non-savings, non-dividend income of Scottish taxpayers is therefore crucial in providing the Scottish government with the flexibility it needs to set and meet its public expenditure commitments.

To exercise this power, the Scottish Parliament must pass a ‘rate resolution’ for each fiscal year, before the beginning of that year. For example, MSPs must agree the Scottish income tax rates and bands for 2020/21 no later than 5 April 2020.

To achieve this with proper Parliamentary scrutiny at Holyrood, there is an expectation that the UK Budget each autumn will be followed by the Scottish Budget before Christmas. This would allow two to three months before Holyrood must pass its rate resolution and Budget.

A squeeze on Scotland

Income tax is only partly devolved to Scotland. Essential features such as the tax base and the personal allowance remain reserved to Westminster. In practice this means that Holyrood has less control over Scottish income tax than many Scots would like it to have.

Boris Johnson, during his successful Conservative leadership campaign, suggested raising the higher rate income tax threshold dramatically – from £50,000 to £80,000. It may transpire that similar suggestions are used to attract votes in a general election.

Another relieving measure would be an increase in the personal allowance – which would be a decision by Westminster. It would cut income tax revenues throughout the UK, including Scotland, without giving Holyrood any say in the matter.

By contrast, the suggested hike in the UK higher rate threshold would have no automatic impact on Scottish income tax rates and bands, so it would not directly affect tax revenues from non-savings, non-dividend income of Scottish taxpayers.

In reality, the position would be much more complex. If there were higher rate thresholds of (say) £80,000 south of the border and £43,430 (the current level) in Scotland, the differential would offer a massive boost to tax planning and tax avoidance activities.

With such huge divergence between tax thresholds, some higher earning Scottish taxpayers would move south. Many other people would shelve plans to move to Scotland – in some cases choosing to work there while commuting from their homes elsewhere in the UK.

While tax is not the only factor influencing decisions on business structure, increased divergence of income tax thresholds would encourage businesses to incorporate – or to do so much earlier in their life cycle.

If Scottish businesses were to rush to incorporate, this would lead to them paying taxes on profits and dividends at much lower rates. And of even greater concern to the Scottish government, they would be paying these taxes to Westminster rather than Holyrood.

Until a UK Budget was tabled, it would be hard for Scottish Finance Secretary Derek Mackay to know what fiscal tools he had in his armoury, or by what methods he might propose to balance Scotland’s books.

How would Westminster pay for its income tax giveaways? Would it introduce big increases in national insurance contributions? After all, the thresholds for NICs – a UK-wide tax – have tended to follow those for non-Scottish income tax.

What about company tax? Under legislation introduced by Philip Hammond, the corporation tax rate throughout the UK is scheduled to fall to 17% on 1 April 2020, but there is speculation that it might be cut further to enhance competitiveness in a post-Brexit world.

Perhaps the UK will follow global trends by relying increasingly on revenues from indirect taxes. VAT is a reserved tax, so Westminster might decide to increase VAT rates, or widen the VAT tax base – or a combination of the two.

The fiscal framework agreed between Holyrood and Westminster provides a degree of comfort. Changes to reserved taxes, and to public expenditure in reserved areas, already impact on Scotland through block grant adjustments under the Barnett formula.

However, Scottish income tax gives Holyrood crucial flexibility. Any possible shift away from income tax to other, reserved taxes is likely to be seen by many in Edinburgh as depriving the Scottish Parliament of its fiscal powers, and undermining the spirit of devolution.

At the time of writing this, it looks as though a general election might not take place until 12 December – or perhaps even later.

The result of such an election is hard to predict. It might give Boris Johnson’s Conservatives an opportunity to slash income tax for the better off, or it might allow another party or coalition to pursue a very different course of action.

This means that the political and fiscal background against which Mackay must formulate his Budget for 2020/21 may not become clear until (say) Christmas or perhaps even into January.

It appears that Mackay may have to bring forward and seek approval for his proposals for 2020/21 against a very taxing timetable. 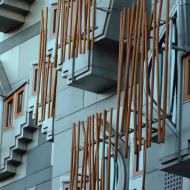 Is Scottish VAT too hard to assign?