Stuart qualified as a CA in 2006 whilst working for Grant Thornton in the UK. Following qualification Stuart took on several internal and external secondments, before going on to work in various risk management roles at Lloyds Banking Group. Emigrating with his family to Australia in 2014, he now works within the global Internal Audit function at ANZ Banking Group, working closely with senior stakeholders across the bank’s global footprint to support strategic change. Through his various roles Stuart has found the CA qualification to be widely trusted and acknowledged, with high regard for the skills and inquisitive mindset it cultivates.

Stuart views the ambassador programme as a key tool in promoting and fostering stronger links between ICAS members who are based abroad. Through the programme he is keen to ensure the profile of ICAS continues to be raised across the Melbourne business community, and is excited to be involved in the initiative.

Outside of work Stuart enjoys travelling with his family, taking advantage of the opportunities to explore Australia and beyond. He is also actively involved in sports both on and off the field, and also spends many hours at the world famous MCG watching cricket and AFL.

Shona qualified as a CA in 2013 at Cowan & Partners, a boutique firm based in Edinburgh, where she gained diverse accounting, tax, insolvency and audit experience.  She then went on to pursue a career in Audit at BDO in Scotland, until relocating to BDO’s Sydney office in July 2015 where she has quickly progressed to Manager in the firm’s Audit Division.

Shona’s client portfolio ranges from large ASX listed groups and global corporations, to small privately owned entities. Shona has also built up a niche expertise within the technical accounting space, working closely with clients on the implementation of new and emerging standards under the IFRS framework, and guiding some large entities through early adoption of these standards.

Shona is the proud Co-Founder of the BOND Network in Sydney, 'Building Opportunities Networks and Development'. This is now a well established group of over 100 like-minded young professionals from a wide range of companies and industries, who come together regularly to share experiences, provide advice and most importantly develop their own networks for the future.

Sydney has provided Shona with a fantastic network of friends as well as the opportunity to enjoy a fantastic lifestyle, regularly spending weekends hiking and taking advantage of the outdoor lifestyle all year round.

After 30 years as an International Corporate Tax Partner with KPMG and PWC Graeme changed careers in 2012 to set up my own Executive Coaching practice in Sydney, Australia. Graeme started life as a CA with KPMG in Edinburgh, the moved to London, with assignments in Sydney and then New York. After a spell with PWC in London, he returned to do a regional tax role with KPMG based in Singapore.

Graeme chose to set up a business as an executive coach as he always enjoyed counselling and mentoring colleagues and clients whilst in the profession. Graeme's values include being courageous and getting into action, being true to yourself and having fun. He is an advocate of maintaining a healthy work/life balance.

Lewis graduated with a BSc in Accounting & Finance with French Business Studies before joining the finance graduate program at BP, based in London. In 2012, after several years and a number of different placements throughout BP’s finance team, Lewis qualified as an ICAS CA.

Upon qualifying, Lewis left BP and moved to Sydney, Australia where he began working at KPMG in a finance business partner role. In 2014, Lewis moved into a client-facing role and is currently a manager in the Transaction Services Advisory team at KPMG, based in Sydney.

If you are interested in becoming a Global Ambassador for ICAS, email get in touch by emailing global@icas.com for further details and to arrange a call to discuss what is involved. 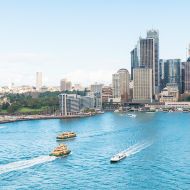 ICAS Members regularly meet up across Australia to network and share inspiration and advice.