Education: Studied politics and international studies at the University of Warwick

2014: Moves to HSBC as Marketing Officer, promoted to Marketing Manager in 2016

If there’s an upside to the pandemic, it’s the space it has given us to work out what we truly want from life. It’s time to step off the treadmill, look after our mental health and pursue our true ambitions, says author and brand strategist Elizabeth Uviebinené

Two questions to ponder: what do you consider to be a good day well spent? More broadly, what, for you, constitutes a good life? Given that, post-2020, we have all been living in the throes of the greatest collective shake-up in living memory, it’s a good time to pause and consider these existential quandaries.

If they’ve already been rattling around your head then, trust me, you’re not alone. Back in 2020, one of the strangest, saddest and most surreal years we’ll ever know, YouGov commissioned a poll, which produced somewhat seismic findings. The survey discovered that just 9% of Britons wanted life after the pandemic to return to “normal”, to the “bad old days”. A lifestyle in which we’d been expected to unquestioningly cram our lives into little boxes and make enough money to enable us to carry on doing more of the same. Which, to be frank, was perhaps never that great a deal. And which is possibly why, two years on, remote or hybrid working is proving rather popular.

And in today’s sandblasted world, working out what’s truly important to us has become imperative. In fact, stepping off the work treadmill to become the best version of ourselves could be the real legacy of 2020. The pandemic all but called our bluff. It forced us to reassess what living well actually means. Which might include ditching the grinding, two-hour daily commute. Because, funnily enough, exploring what gives us joy and brings purpose to our life does seem to be more useful than spending it chasing status and material things. So, again, given we now find ourselves in a handy pitstop, what does a “good life” entail?

Perhaps now is the time to embrace the slower pace of living, if not the restrictions, brought on by lockdowns. Because despite having written about the ways to increase productivity myself, I realise it’s a slippery slope to burnout. Carl Honoré’s seminal 2004 book In Praise of Slow (a refutation of what he calls the “cult of speed”) may have kickstarted a slow revolution – but few can say they seriously took up the gauntlet until the pandemic forced our hands.

If millennials had already dared to imagine life was as important as work, and running around pell-mell wasn’t the best way to stave off a workplace coronary, it’s the incoming Gen Z employees who’ll really begin to place demands on employers. In an interview for my book, The Reset, equity, inclusion and diversity consultant Sereena Abbassi puts it like this: “I was at a protest a couple of weeks ago, and by and large, the people there were under the age of 25. And it’s because that generation has realised that this archaic idea of work and the system actually doesn’t serve them. So much is inaccessible to that particular demographic, such as home ownership. And so much is unstable too – they’ve probably seen many redundancies within their family. They’ve also seen tuition fees skyrocket.”

We do, of course, have to pay the bills. However, capitalism is evolving into a more conscious phase, one where we question the toll it takes on us as individuals. “I don’t think we’ll ever get rid of capitalism entirely,” says Abbassi, “but I think it is going through an evolution… and it makes sense if alongside that evolution, the place of work also evolves as well.”

In the recent past, to live outside the city was to have a high tolerance for commuting – or else to mark yourself out as too relaxed to reach the top. Yet, in this WFH era, all kinds of people have been thinking about moving to the country and trying out a different pace and style of life.

It may be a cliche, but living well could mean ditching the metropolis for greenery and sea air. For those drawn to the cool and forward-looking, trend forecaster and ethnographer Karen Rosenkranz, also interviewed for The Reset, argues there are lots of interesting things happening outside major cities: “Your environment shapes your disciplines and your boundaries,” she says. “If I know there’s a Tesco down the road or a Deliveroo, then that convenience means I’ll work a bit later and get dinner a bit later, for example. I succumb to the fact that I can always be ‘always on’, because everything around me in a major city is always on.”

For those who fear they’ll be isolated and won’t find likeminded people or a community outside the city, Rosenkranz has some words of encouragement. “We always think of a city as such a diverse environment with so many different cultures and people, but then when we live there we often just hang out in very small circles of people who are just like us,” she says. “When people move out, suddenly they interact with people of different ages who do different work and maybe have different political views. And that can be challenging but it’s also refreshing.”

Essentially, then, if we truly want a life well lived, we have to be willing to put in the work. And that means making mindful choices. Ideally, given our emergency on planet Earth, that may revolve around sustainability. And, pressingly, for all of us, wellbeing, which should be at the heart of our new world of work.

Says Rosenkranz, “People need to ask for [change], and I think a lot of people will make that shift now. They’re saying to themselves, ‘Oh, I’ve spent the last four months working from home and I’ve actually been alright.’ It’s about daring to ask for more flexibility. The hustle culture idea is very unfair because it puts all the responsibility on the individual. The idea is that it’s up to you, and if you just work hard enough you can make it work, rather than showing that the system is flawed. I think we have to push back now as employers or freelancers or people working in the system and say, ‘I’m not going to continue to work that way.’”

Anna Stansbury, Assistant Professor of Work and Organisation Studies at Harvard University, told the BBC that one of the biggest effects of the pandemic has been to illuminate the utter lack of voice and influence most people have in their workplace: “Employees in retail, in office jobs, in hospitality, have hesitated to return to long days of working in enclosed spaces with poor air circulation – but have often had no real choice in the matter,” she says. And she forecasts what effects this might have going forward: “I expect it will manifest itself over the longer term, in a generation which has viscerally experienced the risks of not having a meaningful voice in their workplace – and who will put substantial emphasis on organising for, advocating for, and voting for measures to strengthen employee representation and workplace democracy in the future.”

It might be fanciful to assume all workers will have a voice, but our attitudes to work can’t be policed so easily. The more we speak up, the more we empower others to ask for change and assert our needs; to reset our professional lives so that they work for us – rather than moulding ourselves and our lives to our employer’s benefit.

If, for some, this period is merely a temporary blip in the modern way of working, one that will return to “normal” the moment the dust is settled, the truth is no one really knows how this disruption will shake out. Pandemics historically have a way of tearing permanent holes in the fabric – why would this one be different?

The real gift 2020 gave us was the gift of space – the chance to work out what is good and bad in our life and reimagine how it might be more sustainable and fulfilled. We now have the potential to create our good life – whatever we imagine that looks like – with choices on the table that were perhaps unimaginable to us at the end of the previous decade. Everything’s up for grabs: our careers, our relationships, how we communicate – and how we can be better citizens. And while there are certain things that we can’t control externally, we can certainly decide how we choose to respond.

Life can be different. Most of us – almost all of us, in fact – don’t want to go back to the way things were. So, think back to the two questions I posed earlier. Your answers may surprise you – but they should lead you in the right direction. 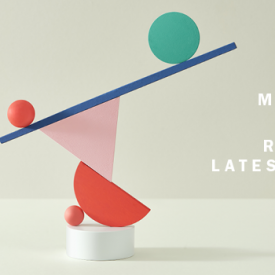