Donald Drysdale looks at the possible shape of VAT after a no-deal Brexit. This article is intended as general commentary and not as a substitute for professional advice.

The future of VAT in the UK

VAT is essentially a European tax. However, if the UK were to leave the EU on 29 March 2019 without agreeing a deal for its withdrawal, we would continue to have a VAT regime. It is an efficient tax, widely replicated throughout the developed world and favoured by politicians as a valuable revenue-raiser.

The Government’s advice on a no-deal Brexit

As part of its preparations for the possibility of a no-deal Brexit, the UK Government has published guidance for businesses on matters they should consider in relation to VAT. This is contained in a technical note issued on 23 August as part of a batch of 25 advisory notes.

Initially, the VAT rules relating to UK domestic transactions would continue to apply to businesses as they do now. However, the Government would have greater freedom to change the VAT laws in future, since it would no longer be constrained by the restrictions that apply to EU member states.

The Government’s stated aim is to keep VAT procedures unchanged as far as possible at the outset, but there would be some specific changes to the VAT rules and procedures on transactions between the UK and EU member states. Businesses potentially affected should be preparing now for these changes.

Importing goods from the EU

Following a no-deal Brexit, the current rules for imports from non-EU countries would also apply to imports from the EU. However, new postponed accounting arrangements for import VAT would be introduced to enable VAT-registered businesses to account for VAT on goods imported from both EU and non-EU countries on their VAT return rather than on entry into the UK.

VAT would be payable on goods sent to the UK as parcels by overseas businesses unless already relieved under domestic rules (e.g. zero-rated children’s clothing). Low-Value Consignment Relief would no longer apply to any parcels arriving in the UK – it is to be abolished anyway. For parcels valued up to £135, VAT would be collected online from the overseas selling business. VAT on parcels worth more than £135 would continue to be collected from UK recipients in line with current procedures for parcels from non-EU countries.

Exporting goods to the EU

Following a no-deal Brexit, distance selling arrangements would no longer apply to UK businesses and they would be able to zero-rate goods exported to EU non-business consumers.

VAT-registered UK businesses would continue to be able to zero-rate sales of goods to EU businesses but would no longer be required to complete EC sales lists. However, to support zero-rating they would need to retain evidence to prove that the goods had left the UK, as is already required for goods exported to non-EU countries; any prospective changes in these procedures will be announced in due course.

Under EU rules, goods entering the EU from the UK would be treated in the same way as those from other non-EU countries, with associated import VAT payable on arrival in the EU. EU member states’ rules may differ, and UK businesses should check with each country concerned to find out whether import VAT payments would be due at the border.

Exporting services to the EU

The main VAT ‘place of supply’ rules, which determine the country in which VAT on services must be charged and accounted for, are based on OECD guidelines and would remain unchanged for UK businesses.

For UK businesses supplying digital services to non-business consumers in the EU, the place of supply would continue to be the customer’s country of residence and the VAT would be due there.

For UK businesses supplying insurance and financial services, input VAT deduction rules for financial services supplied to the EU might be changed following a no-deal Brexit, and the Government will announce further details in due course.

The EU Tour Operators' Margin Scheme (TOMS) would cease to apply to the UK.  The Government is working with the travel industry to minimise the impact of this.

Businesses would no longer be able to use the UK’s Mini One Stop Shop (MOSS) portal to report and pay VAT on sales of digital services to non-business consumers in the EU. UK businesses wishing to use the MOSS system would need to register for the VAT MOSS non-EU scheme in an EU member state; this would not be allowed until after the UK had left the EU, and the time limits for registration are very tight. Alternatively, a business could register in each EU Member State where sales were made.

UK businesses would no longer have access to the EU VAT refund system but would be able to claim VAT refunds from EU member states through the existing processes for non-EU businesses. These vary across the EU and businesses would need to ascertain the processes in the individual countries where they plan to incur costs and would want to claim refunds.

UK businesses would be able to continue using the EU VAT number validation service to check the validity of EU (but not UK) business VAT registration numbers. HMRC is developing a new service for allowing UK VAT numbers to be validated.

The technical note offers little guidance on the politically-sensitive issue of problems which might face businesses in Northern Ireland trading across the border with the Irish Republic.

The Dublin Government has indicated that it would need to discuss the repercussions of a no-deal Brexit with the European Commission and fellow EU member states. The UK Government’s note simply recommends that businesses which trade across the land border should consider whether they will need advice from the Irish Government about necessary preparations.

In a scenario where politicians of all persuasions seem to have found almost every aspect of Brexit too hot to handle, it seems that the Irish question remains one of the hottest of all. 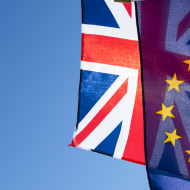 Tax: Preparing for a no-deal Brexit