Public interest members also contribute to the governance of ICAS; exercising oversight within the ICAS regulatory functions and ensuring that processes are applied consistently and fairly.

Details of the public interest members on the ICAS regulatory committees are as detailed below.

An experienced Non-Executive Chairman and Director with a developed and eclectic skill-set in corporate governance, risk and reputation management gained within both the public and private sectors.

Matt Smith OBE JP Matt was Scottish Secretary of UNISON and President of the STUC. He serves on the Scottish Human Rights Commission; the Scottish Standards Commission; the Employment Appeal Tribunal and as a non-executive Director of Scottish Water.  He is a Director of Irvine Bay Regeneration Company and of Unity Enterprise. Matt is a Fellow of the SCDI. He sits as a Justice and on the JPAC in North Strathclyde; on the Disciplinary Panel of CIPFA and formerly on the ICAS Discipline and Appeal Panel. He has served on various bodies including the Calman Commission and the McIntosh Commission.

Roy qualified as a solicitor in 1974 and became partner in Iain Smith & Co in 1977. He remained partner until the commercial department of Iain Smith & Co joined Maclay Murray Spens LLP in 2007. He retired in 2009 but remained a consultant until 2017.

He was the recipient of the R3 Scotland Lifetime Achievement Award in 2016 and sat on the ICAS Investigation Committee until 2016.

Liz has a long history of work in both the public and private sectors. She is currently Commercial Director of Edinburgh Chamber of Commerce Group and Managing Director of Chamber Developments Limited, a wholly owned subsidiary of Edinburgh Chamber of Commerce. Prior to this role, she was a Business Development Leader at Ernst & Young having been recruited to develop and deliver their Market Leadership strategy for Scotland and integrate a ""one Scotland"" approach to the region. Prior to 2002, she successfully established a number of businesses each of which she led to a successful exit through a trade sale.

Bruce qualified as a solicitor and in 1985 co-founded Dickson Minto W S, a law firm specialising solely in corporate law. He managed that firm for over 30 years and remains a practising solicitor and notary public.

For seven years, Bruce chaired the Stewart Ivory Foundation, a charity dedicated to the provision and enhancement of financial education in Scotland. He was Chairman of the Campaign Board, which raised the costs of refurbishing the Royal Museum, Edinburgh and completed two terms of office as Chairman of the Board of Trustees of the National Museums of Scotland fulfilling over 10 years as a Trustee of that Board. He was also a Trustee of its Charitable Trust Board and a Director of its Enterprises Board. He has recently become a member of the Royal Botanical Gardens of Edinburgh Foundation Board.

He was awarded an OBE in 2015 for services to culture in Scotland.

He was a founding member of the CPD Regulatory Committee, before transferring to the Authorisation Committee, where he finished in late 2017.

Donald is a qualified solicitor, currently a partner in the Edinburgh-based firm of Clark Ferguson. He is in charge of the firm’s criminal law and Human Rights department and also supervises all criminal injuries compensation claims, other accident and personal injuries claims and Court of Session cases involving Judicial Review.

He sits as a part-time sheriff, and as a tribunal chair for mental health cases.

Leslie is an architect, planner and urban designer with experience in practice, consultancy, education and research in the UK and Germany.

Prior to entering academia, he worked in private practice for a number of years and in the voluntary sector for the Community Technical Services Agency Ltd. in Liverpool. In 1997, after eight years in the Lehrstuhl für Städtebau und Landesplanung at RWTH Aachen, he returned to Edinburgh where he was Head of the School of Architecture at Edinburgh College of Art from 2000-11.

He has taught and examined on programmes at undergraduate and postgraduate level in architecture and urban design, as well as supervising and examining research degrees, throughout the UK and in Ireland, Germany and Italy. In addition, he has considerable experience of quality assurance and enhancement-led review processes in architecture, art and design.

For the Architects Registration Board, he has been involved in various committees and the prescribed examinations since 2002. He was a founder member and chair of the Architects Professional Examinations Authority Scotland Ltd.

A specialist in urban design with a keen interest in participation and working with communities, he has published regularly on these subjects in the UK and internationally.

Carole has a background in school education (mostly mathematics), having served as the Head Teacher of Kilmarnock Academy from 1997 to 2011.

She retains an ongoing involvement in education, teaching/tutoring on a part-time basis, and writing textbooks for mathematics. She serves as a Commissioner for the Queen Victoria School in Dunblane and is the Chair of the Scottish Secondary Mathematics Group.

From 2011 to 2018, Ms Ford was the Convener of the Law Society of Scotland’s Regulatory Committee (its first lay convener, having been elected by the other members of the Committee) She was also the Convener of the Disciplinary Sub-Committee of the General Teaching Council Scotland from 2009 to 2011.

Irene worked as a senior leader in banking, primarily at HSBC, where her roles were highly international, leading Corporate Banking teams in UK, Europe and USA. Irene subsequently founded her own business as an Executive Coach, Mentor and Business Consultant, and supports leaders, aspiring leaders and pro bono clients at companies of all sizes, from start-up to complex global multinationals.

Irene is a Fellow of the Chartered Banker Institute, a Committee member at the 2025 Foundation, and an active member of the Association of Coaching, Changing the Chemistry and the Institute of Directors.

Rachel has recently retired as the Head of the Corporate Recovery and Insolvency team at Brodies LLP, where she was also a partner. She has specialised in corporate recovery and insolvency law for over 25 years, with extensive experience in director disqualification work, and involvement in several high-profile insolvency cases.

Rachel has been involved with several insolvency committees, including R3’s General Technical Committee and the Scottish Technical Committee (which she chaired for over 10 years). She is a member of the Law Society of Scotland’s Corporate, Banking and Insolvency Committee and also chairs the Law Society Insolvency Accreditation Panel. In 2017, she was appointed by the Lord President of the Court of Session to the Advisory Council on Messengers-at-Arms and Sheriff Officers

She is also an accredited mediator.

Ian is Director for Scotland for the General Dental Council where he manages the GDC’s activities in Scotland, working with the Scottish Parliament and Scottish Government; consumer organisations; patients and members of the public and the dental profession.

Ian's role is to help us better protect UK dental patients by more frequently and effectively engaging with people in Scotland and Scottish healthcare delivery and policy bodies where there are issues of patient protection and regulation.

Ian graduated from the University of Edinburgh with an honours degree in geography. After working for various companies in sales and marketing, he joined BT in 1982 and carried out a variety of roles, latterly as Partnership Director at BT Scotland. Ian was a ministerial nominee on General Teaching Council Scotland until 2012 and was then appointed as a lay member. He chairs the Finance and General Purposes Committee and sits on the Executive Committee. He is a Board Member of Perth College UHI and sits on various local authority committees in Perth and Kinross. He has served as a lay member on school inspections teams with Education Scotland since 1996. Ian was appointed MBE in January 2005 for services to education in Scotland.

Judith is a languages graduate of the University of Bristol and the University of Toronto where she began her teaching career. On moving to Edinburgh, she taught French and moved into education management. In 1990 she became the first Chief Executive of the Scottish Council of Independent Schools (SCIS) and oversaw its successful development until she stepped down in 2010.

She played a key role in Scottish education, holding appointments on the Scottish Qualifications Authority Advisory Board, the General Teaching Council for Scotland, the Government’s Curriculum for Excellence Management Board and other such bodies.

Judith has since qualified as a tutor of adult literacy and numeracy, has worked in disadvantaged Edinburgh communities and for the homeless. She is a trained mentor for ACOSVO and works for several charities.

She was appointed to the Carnegie Trust for the Universities in Scotland (until 2020), the Court of Queen Margaret University (until 2016) and is currently on the Board of Edinburgh College. She has also served as a public interest member on the ICAS Council (until 2017). She previously served on the Sick Children’s Trust, Common Purpose, the Chamber of Commerce, is a past President of Edinburgh Rotary and is involved with interfaith work in Edinburgh and the middle east.

She was awarded an OBE for services to education and the voluntary sector.

Matt is the former Scottish Secretary of UNISON and has held a range of non-executive appointments. He is presently a Member of the Employment Appeal Tribunal; the Central Arbitration Committee and the CIPFA Investigations Committee. Matt recently completed 2 terms on ICAS's Regulation Board. He is a Depute Lieutenant for Ayrshire and Arran and an Honorary Fellow of the Scottish Council for Development and Industry. He served for over 30 years as a JP and JPAC member for North Strathclyde.

Matt is a former member of the Board of Scottish Water and of the Scottish Police Authority. He served as a Scottish Human Rights Commissioner and a member of the Scottish Standards Commission. Other posts held include membership of the Broadcasting Council for Scotland; Irvine Bay Regeneration Company; the Church of Scotland Church and Nation Committee;  the Royal College of Physicians, Edinburgh; and UNITY Enterprise.

Matt served on the Commission for Scottish Devolution (Calman) and the Commission on Local Government and a Scottish Parliament (McIntosh).He was a councillor in the former burgh of Stevenston. 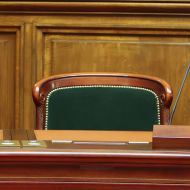 ICAS is subject to independent oversight by various bodies so that our membership complies with professional standards.