The ICAS Charities Panel is responsible for representing ICAS on matters impacting on the UK charity sector, in relation to:

It also issues guidance on accountancy related matters to ICAS members who are involved with charities in a variety of roles including, as charity trustees, finance directors and advisers.

Colin Kerr is Director of Finance at The Children's Trust.

Prior to this, Colin was Director of External Relations at the Commonwealth War Graves Commission. Having started his career with ten years at Deloitte, he has spent most of his career as a finance director, in both the commercial and public sectors, including ten years in the NHS.

Chris has taken particular enjoyment over his career in working closely with many charitable and not-for-profit entities.

Colin is the Group Finance Director of the Moredun Foundation group of companies, a mixed charitable and commercial group focusing on promoting animal health and welfare through research and education.

The group owns and operates Pentlands Science Park, south of Edinburgh, and includes the internationally recognised Moredun Research Institute. Prior to joining Moredun in 2000, Colin was in practice having trained with Pannell Kerr Forster and was latterly a Director in a small spin-out practice. Throughout his career, Colin has served as a trustee of several charities.  He is a Past President of Midlothian and East Lothian Chamber of Commerce and is an Elder in the Church of Scotland.

Gareth Morgan is Emeritus Professor of Charity Studies at Sheffield Hallam University, and senior partner of The Kubernesis Partnership LLP, a small firm of charity consultants based in East Lothian and in Yorkshire.  He specialises in issues of charity regulation and accounting across all three UK jurisdictions, with a particular interest in the impact on small/medium charities and the regimes for independent examination of charity accounts.

He has led research on charity accounting and reporting issues for charity regulators and for the CCAB and he is the author of a wide range of research papers and two books in the field: ""Charitable Incorporated Organisations"" and ""The Charity Treasurer's Handbook"".

Prior to joining the ICAS Charities Panel, he served for six years on the ICAEW's Charity Technical Committee and he is also active in various working parties with the Charity Law Association.

Jamie is a partner at MHA Henderson Loggie. He trained with a Big 4 firm and after qualifying gained over twenty years of experience before joining Henderson Loggie in 2007.

He specialises in audit and accounting services for charity and not-for-profit entities and is currently head of the firm’s Charity Sector Group.

Jim is in practice as a consultant and has a strong involvement with the charity sector.  He has been a member of the Charities Committee since 2013 and is a charity independent examiner.

He is Treasurer or Finance Committee member of 8 charities, some with overseas interests, working with youth, senior citizens, churches, education and the environment.  He has wide-ranging practical experience in charity governance, accounting, stewardship and strategic management. Jim previously worked for 30 years as a general practice partner, latterly with Cook & Co in Glasgow, where his portfolio included a large number of charity clients. Away from the desk, he enjoys hillwalking, languages and travel.

Joining Kibble Education & Care in 2008, John has over 20 years of accountancy experience in industry and commerce.

He has worked for a variety of organisations including large family businesses, a multi-site retail organisation, and more recently a £1 billion turnover PLC.

John has responsibility for all Support Services at Kibble, including Finance, HR, and IT.

Kelly is an Audit Partner in RSM. She is a Chartered Accountant and leads the not for profit offering in RSM’s Glasgow office. She has over 18 years’ experience in providing audit and assurance services to not for profit organisations. She looks after a wide portfolio of clients ensuring that their compliance needs are met and providing general advice and support. Kelly is experienced in working with local and national charities and Registered Social Landlords (RSLs), as well as owner managed businesses.

Kelly is a member of the RSM national not for profit group, which meets quarterly in London to discuss sector developments and share issues arising, and solutions found, for our not for profit clients. She is involved in delivering training to Trustees/Committee members and management teams and delivering technical seminars and updates for charities and housing associations.

Kelly is a voluntary board member, and Chair of the Audit Committee, of West of Scotland Housing Association.

Rachel is an ICAS qualified accountant, starting her career with EY in Audit.  She then moved to the advisory arm of EY and spent 4 years working in the Strategy & Business Change team in the Government & Public Sector part of Advisory - supporting the government with some of its biggest challenges. At EY she also spent a year on secondment to the Social Business Trust (a venture philanthropy organisation) as an Investment Manager, performing due diligence building the investment case and presenting recommendations to the investment committee. She left EY after 8 and a half years and has spent the last 4 years at Brightside, where she is now Chief Operating Officer. Brightside is a £1m UK social mobility organisation that has worked with 100,000 young people since 2003.  Rachel was also a Trustee at a young person’s mental health charity and volunteers with Brightside as an online mentor.

Scott is an Audit Partner at Johnston Carmichael, based in the Inverness and Elgin offices. Having qualified as a Chartered Accountant with a Big 4 firm, Scott has over 20 years' experience of working in public practice and industry. During this time, Scott has provided audit, SORP accounting and technical advice to many charities and other entities in the not for profit sector.

Day to day, as one of Johnston Carmichael's charity technical specialists, Scott has responsibility for developing and presenting the firm's not for profit sector training and development programme. As well as signing audit reports on behalf of the firm, Scott is also Independent Examiner for a number of charities throughout Scotland and is a member of the PKF not-for-profit sector focus group.

Tom is a partner in CGPM Consulting LLP a firm of Chartered Accountants working almost exclusively with registered charities. Tom specialises in cross-border charity governance, risk and finance. Tom spends about half his time undertaking lessons learned reviews or investigations to support charities resolve notifiable events or serious incident reports and in more serious fraud or employment investigations. The other half is spent providing board secretariat and charity business improvement and consulting services.

He trained with KPMG and after a number of years working overseas troubleshooting for Big 4 firms and banks, Tom returned to the UK to migrate those skills into supporting charitable organisations through a range of assurance services within professional practice prior to setting up CGPM.

Tom is also a trustee of the Royal Zoological Society of Scotland, the Royal Scottish Forestry Society and of the Donkey Sanctuary where he also chairs their Audit, Risk and Assurance Committee. Until 2017 Tom was chair of Dunedin Canmore Housing and so also served on the Board of the Wheatley Group for a period.

Victoria is a senior associate solicitor at Anderson Strathern LLP.  She deals with private client and charity law/charity tax matters and is accredited by the Law Society of Scotland as a specialist in charity law. She is recognised as being one of the leading lawyers in Scotland in the area of charity law.

Victoria is also tax and investment qualified. Victoria is a director and charity trustee of the Scottish SPCA, so understands first-hand the issues which affect the charity sector today. She is a co-author of “A Practical Guide to Scottish Charity Law” which is due to be published by Greens later this year. 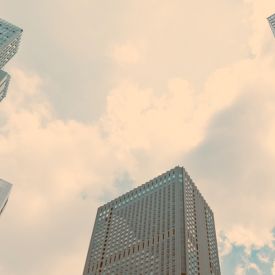 As part of its remit, the ICAS Charities Panel comments on public consultations and other matters of relevance to the…