Chris Wongsosaputro CA discusses leading with inclusion in mind, being empathetic and his aspirations for UK politics and beyond.

Chris Wongsosaputro CA moved to the UK in 2011 to study at University College London (UCL). He has worked for eight years in various roles including Strategy Consulting, Financial Due Diligence and Audit. He currently works as Strategy Consultant in PwC Strategy& London office after joining the team in September 2022. As a member of the Fabian Society with a keen interest in politics and international affairs, Chris reveals why leadership is key to both the worlds of accountancy and politics.Tell us a bit more about your style as an inclusive leader.

"When I had the opportunity to lead teams, particularly during my audit days, I would start and end the project with a team briefing. Doing so provides an opportunity for each team member to reflect on the team's and individual's objectives for the project, which the team will work towards fulfilling during the project. As a team, we will monitor the progress of the objectives throughout the project to keep one another accountable.

"We also discussed each team member's non-negotiables to be mindful of during the project in order to create an inclusive team environment. For example, some team members might have childcare responsibilities while others might have personal hobbies they would like to pursue. The team aimed to consider these commitments while scheduling key project milestones such as client meetings and deadlines. I believe we need to demonstrate empathy as leaders. It is important to have humility and a listening ear to help others out and be a good leader."

CAs can help increase the accessibility and diversity of the profession by upholding the values of inclusive leadership. How do you ensure you lead with inclusion?

"Besides my day-to-day roles, I had the opportunity to contribute to EY's diversity and inclusion agenda by serving in the Executive Committees of Equality, Diversity &Inclusion networks, such as the Far East Network and Unity. I was the Treasurer of EY Unity where I helped to ensure that we had enough funding to carry out our aims and objectives including organising events such as Pride for our members. Unity provided an avenue for the LGBT+ community and allies to get to know one another in a safe space so I was proud to have been part of the network."

"I believe we need to demonstrate empathy. It is important to have humility and a listening ear, to help others out and be a good leader."

"A great example of inclusive leaders who have mentored me are the EY Unity network leaders. They embody the firm's equality, diversity and inclusion values and want to demonstrate that the firm welcomes employees from the LGBTQ+ community. They create an open and welcoming environment for the LGBTQ+ community where nobody feels judged. I feel this is an important message to be conveyed across EY and other companies too - that the work environment can be open and inclusive, where individuals' contributions are recognised regardless of their backgrounds."

Politics is an area of interest for you. What created your interest?

"I became interested in politics after becoming aware of its importance at a young age. In the aftermath of the 1998 Asian Financial Crisis, riots broke out in Indonesia with economic, political and racial factors combined to trigger the unrest – the underlying factors had been years in the making. Many from the Chinese community, of which I am a member, left the country following the riots which affected the community. This childhood event demonstrated to me the important role of politics in maintaining peace and harmony among citizens of all backgrounds.

How can your experience with inclusive leadership in professional services be applied in a political setting?

"Inclusive leadership is very important in politics, because politics are never a case of black and white. There are often shades of grey, and we need to ensure that people have the freedom and the ability to express their views. To do that, we need inclusive leaders to encourage an open debate and create the platform for people to make the judgments for themselves.

"I have experience of inclusive leadership during my time at EY Voice; an employee-led forum serving as a bridge between employees and Management. As a group, we collate on-the-ground feedback and questions on matters of the day. We communicate them to our management during regular catch-ups where they are discussed and responded to. EY Voice has shown me the need for grassroots engagement to help shape the company and its initiatives.

For politics, there are opportunities to participate in consultations on local matters. Consultations and the subsequent follow-up actions should be welcomed as they provide opportunities for leaders to demonstrate empathy and listening skills." 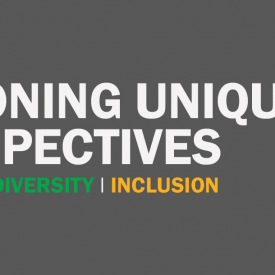