Liz Jessop CA, KPMG Cambridge, was announced as the winner of our Chief Executive Award at yesterday’s CA Summit.

Liz was named on ICAS’ Top 100 Young CAs 2020 list in late August and was then invited to take part in the One Young CA competition.

Liz was selected as the Chief Executive Award winner for her deep commitment to gender equality and focus on finding solutions and making a difference.

“I would like to congratulate Liz on her award. She is a very inspiring and engaging young CA.

“She is passionate about gender equality and has spoken at One Young World previously about technology and women in business.

“I am confident she’ll be an amazing representative for ICAS.”

Liz is Development Lead, IT’s Her Future at KPMG. The programme, which launched in 2016, seeks to improve gender diversity at KPMG and beyond. It provides mentors, events, networking and training opportunities to those interested in pursuing technology.

She joined KPMG as part of its school leaver programme in 2013. The firm supported her accountancy studies at the University of Exeter, where she graduated with a First in 2017, and the at ICAS, where she qualified in 2018. She has also been cochairing WorkAbility, KPMG’s disability network, since 2017.

Liz said: “Cliché as it seems, I am really surprised and honoured to win this award. To me it is that recognition of a lot of hard work and dedication over a number of years.

“It really highlights how inclusivity and diversity is central to thinking in 2020 and I hope we can keep this momentum going and create lasting change which will benefit everyone.”

Find out more about Liz in the video below: 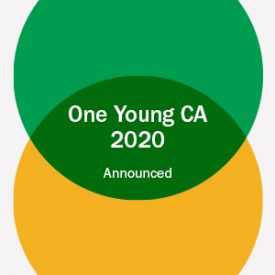