Three CAs share why they settled in the Channel Islands

When you think of the Channel Islands, you may first imagine John Nettles traipsing around Jersey and solving crimes in Bergerac. But the two bailiwicks of Jersey and Guernsey have evolved considerably since the BBC series ended in 1991, partly powered by a constant stream of financial professionals seeking new career opportunities and a different pace of life. Their GDP per capita reached £45,320 and £51,868 in 2019 respectively. Compare that with the UK’s GDP per capita at the time of £33,763 and the location instantly appears attractive.

The Channel Islands, with its combined population of almost 177,000, have become home to a small but well-connected community of 225 CAs and 40 students. They’re part of the location’s established financial and professional services sector. Jersey reported that, by 2020, financial services made up 38.7% of the island’s economy, and that its employees made it the second-most productive sector, behind only utilities. Similarly, finance topped Guernsey’s list of sectors, accounting for 40% of GDP.

We speak to three CAs who have made the Channel Islands home to learn about life and work outside of the UK, the international value of the CA qualification and the importance of getting involved in the local ICAS community.

I initially applied to join Strathclyde Police, but received a polite letter saying that, unfortunately, I was half an inch too short. They said, given my grades, I should go to university, then possibly come in at a different rank. So, I did a week’s work experience at an accountancy firm in Inverness and I thought, this is for me.

I trained and qualified with Scott Moncrieff. It’s a great firm and I really enjoyed my training, but I wanted to expand my horizons and nothing in Scotland felt quite right. One day I saw an advert saying, “Interested in working overseas for KPMG?” I was drawn in. They were looking for a newly qualified accountant to join them as manager. I was especially attracted by the Big Four because of the overseas travel and meeting new people in new environments. And, during my career with the firm, it took me to parts of the world that I would never have had the opportunity to go to otherwise.

The wonderful thing about the Channel Islands is that we are very well connected to businesses all over the world, and you can use the location to broaden your career, then choose to go back home or venture even further overseas. I would say to those who want to have a career abroad that the Channel Islands have both excitement and great career opportunities – and you are only ever a short flight away from seeing family and friends back in the UK.

I only envisaged coming for a couple of years but Jersey has become my home. It is a very community-focused environment. And you get that city feel despite your commute never being longer than 20 minutes. The clubs and networks here, whether they’re for sport or other hobbies, are very welcoming of new members. There’s something for everyone. Walking is a real passion of mine. And despite Jersey being just nine miles by five, there’s a huge trail of ways to go wandering around.

There is a variety of opportunities for CAs in the Channel Islands. The Big Four and smaller firms are all represented. And there are opportunities to work in industry – everything from a global mining company to the charity sector. I have had a wide variety of roles since leaving KPMG in 2016. I’m a Non-Executive Director of Jersey Water and some listed investment funds, as well as being involved in the charity sector. Being Co-chair of the Jersey Community Foundation has enabled me to use the skills I gained throughout my career.

We have an ICAS membership community in the Channel Islands. We hold regular events. We’ve got student members here, and the events appeal to a really broad age range, whether you’re in training or a long-serving member. They’re a great way to meet people and it brings the community together. That’s important, because when you need your fellow CAs, you know they’ll be there for you.

If you’re a newly qualified accountant and you like the idea of island life, now is a good time to move"

In the late 1970s, Glasgow’s economy wasn’t in the best place. I didn’t know what I wanted to do, but I was attracted to accountancy because I knew the CA was a good qualification that could take you wherever you wanted to go – a passport to the world. So, after completing my apprenticeship, I ended up working in Hong Kong, Singapore, Bangkok and London before settling in Guernsey with Credit Suisse in 2004. The profession allowed me to hop from one country to another with a fair degree of ease.

Moving to Guernsey, with its population of 65,000, might have seemed a little strange, but my children were university age and I didn’t want to be commuting to and from London for work. The opportunity in Guernsey came about at the right time – the commute to the office was just a walk. In fact, the typical daily commute in London is probably further than the entire size of Guernsey, which is about six by four miles.

Work in the Channel Islands is very interesting, particularly in financial services and private banking. You’ve got phenomenally clever people in terms of lawyers, accountants, bankers and investment managers. There’s a lot of variety in the work on offer, too. Particularly in the bigger organisations, you will get questions and clients every bit as complex as in big financial centres like London. And there’s a skills shortage here at the moment. Accountancy firms and the fund industry are demanding skilled people. So, if you’re a newly qualified accountant and you like the idea of island life, now is a good time to move.

There are interesting people here who come from all walks of life. There are imports like me and my wife; and there are people who haven’t a trace of non-Guernsey relatives in their family trees. Everyone has a history and we’ve made great friends here. Guernsey itself is safe and secure. The restaurants are fantastic, in particular. It’s also a fairly informal place. Walking from the office to the centre of town, which is only a few hundred metres, people all say hello. It’s a more free, open and relaxing place.

I’m the ICAS ambassador for Guernsey. We’ve got 85 members here, including students. Our social events attract a great range of individuals – from those going through professional training to CAs, like me, in the “third stage” of their careers. In October last year, ICAS CEO Bruce Cartwright CA and then-President Bruce Pritchard CA visited the island. These social events are opportunities to talk to people on the same wavelength. They’ve been great fun and you meet nice people.

ICAS events have great attendance. They help to build strong networks and promote the island as a community"

I had originally intended to study archaeology, but I soon realised digging up ground for most of the year in terrible conditions wouldn’t be much fun. So I applied my talents in maths and economics to accountancy instead. It might be in the blood, too. My family has owned businesses over the years and, in my late teens, I had both a gardening and a painting and decorating business.

I qualified as a CA with a small firm in Glasgow. I then wanted to do something a bit more challenging, as well as moving away, so I began looking at new opportunities. I first visited Guernsey when interviewing for a job at PKF (now BDO). It was the middle of summer and I was immediately sold on the location, which is beautiful. Plus, the job ticked all the boxes because it was a new kind of work for me. It was a really exciting opportunity. And, at the time, prices in Guernsey were a lot less than in the UK – I remember a pint of beer being £1.

When I arrived in Guernsey in the mid-90s, the financial services industry was booming, as it still is. There’s huge demand currently in all sectors because of all the new laws and regulations that continue to be introduced. The perception of offshore locations by the media can at times be negative, but we have robust anti-money-laundering rules in place. We are probably ahead of the UK in that respect. There is still an enormous demand for accountants.

I stayed on the island long term because of the diversity of both the opportunities and the people. I initially came to work for an audit firm, but after a decade, I first moved into the captive insurance sector, then into fund administration with Northern Trust Corporation 14 years ago. We’ve got people from all over the world here and, because it’s a smaller community, the networking opportunities are fantastic. We build really strong networks, enabling people to gain knowledge and experience across many different sectors.

Guernsey is  a vibrant, friendly island with an environmental conscience. And because of the short commutes, you can be in the office for nine, finish at five, and be at the beach for half past five. There’s a plethora of activities here and something for everyone; whether you’re into watersports, football and rugby, or the arts, theatre and restaurants. It’s a great location for families, too.

I joined the ICAS Members Board in 2019, shortly after a visit from Bruce Cartwright. I wanted to learn more about what ICAS does and the benefits of membership. The role means I get to ensure members are represented in decision-making.

We also have events here on the island – we’ve brought members together for dinner and wine and whisky tasting, for example. The events are well attended – with engagement from CA students to members in their eighties. It helps to build those strong networks and also promotes the island as a community. 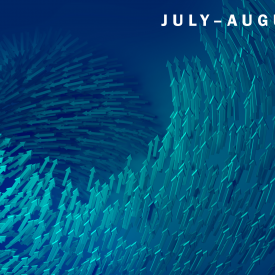