Stewart Ritchie CA was only meant to be in Bermuda for two years. But life has a habit of making other plans. Lysanne Currie talks to the Randall & Quilter CEO, Bermuda, about working hard and playing hard in the land of beautiful pink beaches

You can go to heaven if you want; I’d rather stay in Bermuda.” So said the author Mark Twain – and it’s a sentiment shared by R&Q’s Stewart Ritchie CA, who has now been based on the island group some 13 years longer than he had expected. And it’s all thanks to this very magazine…

He had originally trained with a small firm of accountants called Williamson and Dunn in Aberdeen (“one of the oldest firms of accountants in Scotland, if I remember rightly”), and came third in his final examination. “I thought, ‘I’ll stick that on my CV and see what that does in terms of any doors it might open.”

As it turned out, that door was found courtesy of The CA. “In the back pages there were almost always adverts for job openings,” he recalls. “One of them was a KPMG advert for newly qualified accountants, and then there was this beautiful pink sandy beach, someone windsurfing, someone golfing into the sunset, beautiful blue skies, and it just looked like heaven. Up until then, I wouldn’t have been able to find Bermuda on a map, to be honest.”

As it turned out, it was a different Big Four firm, PwC, that offered Ritchie a position in Bermuda – which sits almost 600 miles off the US eastern seaboard – in October 2004. “I thought, ‘Oh, two years in Bermuda, I can do that!’” And yet, sitting there on the plane, he thought, “‘I hate audit, what am I doing?!’ I’d left my parents and my girlfriend, who’s now my wife, at the airport, in tears. And then when the plane landed at 6pm, it just blew me away.”

It’s a great lifestyle in Bermuda. Though the pace and culture are very different, the work is no less challenging than what you’ll find in London or New York"

From the air, Bermuda is lush, green and beautiful, and as the sun began to set, Ritchie experienced a sudden change of heart. “It was fantastic – there is nothing that prepares you for it.” He recalls his first “overwhelming” experience as a young CA, adjusting to living in a different country. “I remember it being a little bit like a freshers’ week,” he says. “You come in with a group of perhaps 15-20 people, all of whom are going through the same things – and some who have maybe moved away from home for the first time, away from their families and friends – which in some ways really helps you settle in.”

To ease them in, they had attractions such as Harbour Nights, “which was like a market event, along Front Street. It’s a busy couple of weeks, just as you’ve un-boarded. It does leave you a little bit breathless because it’s an amazing first couple of weeks. You’re getting your bank accounts and your accommodation sorted, and at the same time you’re trying to settle into your place of employment, get trained and actually build friendships. The friendships that you develop are those that will last.”

And here he has stayed ever since, originally with PwC, starting off as a senior associate and rising steadily through the ranks to become director, until June last year, when he joined Randall & Quilter as Senior Vice President in the M&A Legacy team. “Effectively we go around either buying insurance companies that are in runoff or we try to find liability solutions for people who want to get their liabilities off the books,” he says. “In September 2019 they said, ‘With all these skillsets you have coming from PwC we think we’re going to put that to some good use.’ So they made me the CEO for their Bermuda company.”

The role was supposed to be around four parts M&A to every one part R&Q CEO, but Ritchie has found himself spending more time on the CEO role. “There’s a lot of governance requirements,” he says. “We now have three subsidiaries.” He’s also trying to build up his finance team: “We keep eyeing companies – they’re in the Caribbean or the States, and we’re bringing them all under one umbrella. With legacy platforms, anything this side of the Atlantic is pooled under us.”

On the regulatory side, he fears “there’s been a constant creep of standards that are being pushed onto the auditors, in some instances without any kind of commensurate increases in fees. The audit profession is getting incredibly hard, because the scrutiny from regulators, stakeholders, shareholders and other firms is incredibly high.

“People always anticipate the auditor will find everything and invariably there’s an unrealistic expectation that you should be able to find every instance of fraud or every error from the financial statement. Many clients view the audit as a necessary evil, and don’t perceive it as being of value to them. Consequently, people don’t want to pay what it costs to actually do the audit. So audit firms have to find ways of using AI to interrogate data.

“Regulators are the policemen of the financial world, though ultimately it’s the old saying of ‘who’s watching the watchers’. But I would have thought that the real role for regulators would be more guiding – this is what we think is best practice, this is what we think your audit approach should look like – as opposed to, in my view, hanging people out to dry.”

Ritchie and his wife got married in May 2006, the same month she moved to the North Atlantic island. “It was the first time we’d lived together when we moved over here,” he says, “so it was quite an experience for both of us.” His daughter was born in 2010.

“She loves running along the beach with the dog in the winter months, when the dogs are allowed on the beach. All the same, she misses the old country. She always says, ‘Daddy, can we move to Scotland?’ and I try to remind her about the winters! But she loves the Scottish farmland, she loves the animals, the horses, the sheep, the cows, that you just don’t get here. We have some dairy cows, but there isn’t any kind of real agricultural industry.”

Home is never too far away, however: “We have UK-based companies listed here, so it’s not like you’re not getting senior-level audit experience, you’re just getting it in a very different social culture. When I spoke to a few people from PwC I always said, ‘it’s a work-hard-play-hard culture’. People would say, ‘I hate that phrase,’ but it’s true.”

I thought I would have had a lot more time on my hands when I got older but it hasn’t been true! But I do feel like I have a better work-life balance"

And it’s a great lifestyle in Bermuda. Though the pace and culture are very different, the work is no less challenging than what you’ll find in London or New York. “I could do the same job in London but I’d probably have a much longer commute, so your working day is much longer. Here, you can be finished up at 5.30 and then nip to the beach for a game of beach volleyball.”

He travels quite regularly for work – it’s less than two hours’ flight to New York and two-and-a-half to Miami. “We have two carriers that take people up to Canada, and then probably eight or nine different options flying into the US, but you can get to Atlanta, you can get to Boston, you can get to Philly, Miami, New York… you can get pretty much anywhere with a two-hour journey into the States.” He’ll attend three or four large conferences a year – all based in the US, though he’s already flown back to the UK twice this year with his CEO hat on.

“I thought I would have had a lot more time on my hands when I got older but it hasn’t been true! But I do feel like I have a better work-life balance.” To those thinking of swapping the rainy old UK for sun-kissed beaches, or another teeming metropolis, he can’t recommend it highly enough.

“As a guy in a small accounting firm, I would absolutely encourage people to travel,” he says. “Travelling overseas with the Big Four was a fantastic, invaluable experience for me. I’d encourage people when they’re looking at things like financial services as an industry to think about New York, London and Bermuda, potentially even Cayman, to broaden their horizons. It’s probably the best decision I’ve ever made – other than marrying my wife.” 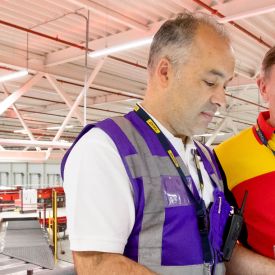