Janice Hutchinson and Jonny Jacobs CA share the thinking behind ICAS’ mental wellbeing strategy  and why the pandemic makes it even more vital, in both the short and long term.

Janice Hutchinson: The ICAS mental wellbeing strategy, which launches this month, is a long-term commitment, starting with a three-year plan. This year we are kickstarting the discussion and removing the stigma, creating a safe space for people to discuss wellbeing. Next year is all about ICAS being in position to be the facilitator, putting members in touch with the resources and help that they may need. By 2023 we aim to be the gold standard, with a demonstrable record of making a difference in the mental health space.

The seeds were sown when Jonny Jacobs CA, Senior Manager of Member Engagement Nicola MacLean and I had a meeting in early 2020, just before lockdown began, to discuss the opportunity for ICAS to drive change in this space. It kicked off in earnest with a session Jonny ran for around 25 members of ICAS staff, including a number of the exec team. We discussed where we were at the time, what we wanted ICAS to stand for and how we would go about setting up a strategy.

Jonny Jacobs CA: It’s a sign that things have changed very quickly in business. I remember giving a speech at an ICAS admissions ceremony in 2017 and feeling incredibly nervous about discussing mental health. I realised my fear meant it was even more important for someone to talk about the subject. Afterwards, I received a lot of messages from people saying that talking about mental health in the accounting profession meant a lot to them.

There are some shocking statistics in the area. Most people know work is a key determinant of mental wellbeing, yet the majority also will not talk to their line manager about it because they think it would be career limiting. There are studies of the profession that show accountants have a higher propensity to suffer from stress at work. And, of course, since the onset of the pandemic, rates of depression, anxiety and loneliness have escalated massively.

JH: Since those early discussions, we have fully immersed ourselves in the subject. I met with five or six businesses with their own mental health strategies to understand their approach. It was important to make connections with people who had already been on the journey. For example, I was put in touch with psychotherapist Gin Lalli, who’s running a webinar for us in May, and she shared her work in helping organisations embed mental health strategies. Business is not just about the commercials. It’s about people and the role of leadership teams. And what the pandemic has done is to open the door to wellbeing becoming a strategic priority.

JJ: As well as the moral and ethical imperative to support mental wellbeing, there is also a business cost to not doing so. Mental illness costs UK business more than £45bn a year, according to Deloitte. And the World Health Organisation puts the cost to business globally at $1trn (£720bn). So, if you accept that as a macro cost to business, maybe you start to consider its cost to your own organisation. That is a very compelling case. Financial professionals can play an important role in the mental health agenda because we’re at the heart of organisations: we could hold the purse strings and we’re often working closely with senior leaders, including the chief executive. That means we have an opportunity to drive real change.

JH: As Jonny says, if workplaces don’t have healthy staff, whether physically or mentally, people can’t perform at their best. In creating the ICAS strategy, we looked at the work of other professional bodies, at a global scale, but the most useful learnings came from business. It’s clear from the firms that are leaders in wellbeing that it’s driven from the top and the leadership is fully engaged. At ICAS, CEO Bruce Cartwright CA has been really passionate about making sure our approach is authentic.

The key thing is that this is absolutely not a tick-box exercise. It comes from a project team within ICAS who are passionate about driving change. We’ve also made sure the project team encompasses all areas of ICAS and all strands of strategy. For example, our ED&I Manager, Ian Bettison, is part of the team so we can ensure alignment with ED&I strategy and that our work is complementary. It has been great to work with Jonny as both an ICAS member and an expert on mental wellbeing.

JJ: Janice, under the sponsorship of the executive, has really brought ICAS together on this. The biggest difference is made when you involve representatives from right across the organisation, in partnership with HR and the executive team. It’s important to broaden that engagement as much as possible. My advice to businesses and leaders is always that you shouldn’t be afraid to start somewhere.

There are three target groups when you’re creating a mental health strategy. One is tone at the top: you want to make sure you’re engaging at a senior level, and ICAS is a step ahead with Bruce’s focus. Second, you want to create a culture shift by building grassroots support: when I worked at Pladis, we increased our number of mental wellbeing ambassadors from five to 120. Then, you need to engage managers through training. If you can engage those three levels, you’re well on your way to getting the conversation going.

Then you can think about broadening your strategy, defining the mission and values of your organisation. You can begin thinking about bespoke strategies for the long term and addressing different groups of stakeholders. The plan at ICAS has been created along these lines and is genuinely holistic, focused on both a great short-term launch and a longer-term ambition. It’s very thoughtful towards the profession, members and students, and I have lots of confidence in the plan.

JH: It’s a real privilege to work on this project with the ICAS team, and we hope that members will feel encouraged to get involved with our journey in mental wellbeing. If we get this right at ICAS, and we are able to change hearts and minds within the profession, it’s going to touch many people’s lives. 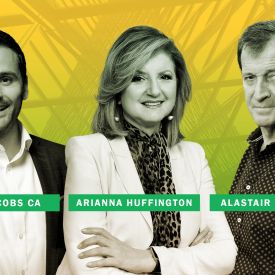