Since moving to Australia he has faced some incredible challenges, both personal and professional, but Australis Oil & Gas’ Financial Controller, Alan Cooper CA wouldn’t have it any other way.

As a youngster in Aberdeen, all Alan Cooper could think about was football. It was all he talked about with friends and it was all he did with his spare time. Whenever he could, he’d be outside kicking a ball and was fortunate enough to play with the Aberdeen FC youth squad for a number of years.

When Alan was 15, his grandfather - who had taken himself to university at the age of 50 - began mentoring him in English and Business Studies. He showed young Alan that education could be valuable and exciting.

At the same time, Alan spent summers travelling and working in Europe with his father’s business and began to look after the books, something he enjoyed enormously. Despite a lifelong football obsession, Alan’s entry into accounting came naturally.

His upbringing would also have one other major influence on his career choice. A childhood in Aberdeen exposed him constantly to people in the oil and gas industry. When he landed in the same game, it felt a natural match, and it still does.

“I’ve been surrounded by oil and gas guys my whole life,” he smiled. “From the offshore workers to the CEO who’d pop into the pub for a pint after work - without realising, I was being influenced all the way through.”

The Aberdeen oil clan in Australia

His first chance to move to Australia came in 2005, with a transfer to EY Perth. In Western Australia he worked with client Woodside Petroleum with what he calls the ‘Aberdeen Clan’.

“I was probably the third guy from Aberdeen to come over to EY Perth due to the oil and gas link between the two cities,” he said. “Woodside is the biggest oil and gas company in Australia and that was a fantastic experience. It was long hours and hard work but learning all aspects of the business so quickly ignited a desire to pursue a career in the oil and gas industry.”

The next career move took Alan back to Aberdeen with Dana Petroleum under the guidance of David MacFarlane, Group FD.

With my ICAS background and EY training, there are few situations you can’t handle.

A FTSE 250 player, it was a fast moving and exciting business that was eventually bought for around AU$3bn in a takeover by the Korea National Oil Corporation (KNOC). Alan’s time with Dana was fast and furious.

“After the first few weeks my boss popped his head in to my office and said, ‘Alan, I know you’ve only been here a short period, but I would like you to assist on the Norwegian deal including the transition of their accounting function into the Group.’

“This was a new challenge to me, but with my ICAS background and EY training, there are few situations you can’t handle.”

Once the KNOC deal went through Alan thought it was a great opportunity to head back down under to warmer climes, something his wife and two young boys were thrilled about.

What were your next challenges in global oil, and how did you embrace them?

I moved to Transform Exploration based in Perth. They had acquired a Canadian company that had discovered a small gas field and had other oil and gas exploration acreage in Papua New Guinea, close to the border with Indonesian Papua where they had interests and were pursuing a very interesting “cross-border” exploration play.

They had a high calibre management team backed by private equity. However, the thing that none of us could control was oil price and investor sentiment towards deploying risk capital in a low oil price environment.

These were interesting times, but all part of life in the oilfield where price cycles come and go.

Unfortunately, as the oil price spiralled downwards it became a case of the investors, quite logically, wanting to re-deploy funds and pursue production opportunities in the US shale oil play.

This then led to part of the business being sold and a management buy-out of what was left. These were interesting times, but all part of life in the oilfield where price cycles come and go.

I was then put in touch with Australis Oil and Gas. This business was created by the senior management team from Aurora, a company they had built and sold for approximately AU$2bn.

I’d previously been CFO for a couple of years and now had an opportunity to learn from a team with particular expertise in the USA onshore oil and gas space.

And you’ve had a few challenges in your personal life, too?

Yes, my youngest son Dylan was born in 2008 and everything seemed to be fine. However, after a couple of days they ran preliminary tests and advised it was likely Dylan had cystic fibrosis (CF).

My wife Karen and I looked at each other and we both thought, ‘I have no idea what that is!’. We did some learning and discovered that it essentially means the body produces too much salt, which blocks up the lungs and digestive system.

At present there is no cure for CF, but the faulty gene has been identified and doctors and scientists are working to find ways of repairing or replacing it.

How do you deal with it, personally?

I knew deep down I had to raise awareness for CF, so I started running. In 2014 I planned out a map of running events in seven Australian cities, including one half-marathon, and ran a grand total of 101 kilometres, introducing myself to as many people as I could along the way.

I raised over AU$6,000, which was great. Recently my fellow CA, Colin Barry, travelled from Aberdeen to run alongside me in Singapore, so the continued support we receive as a family has been good. Together we completed the Standard Chartered 10km in early December 2017 in some gruelling conditions! 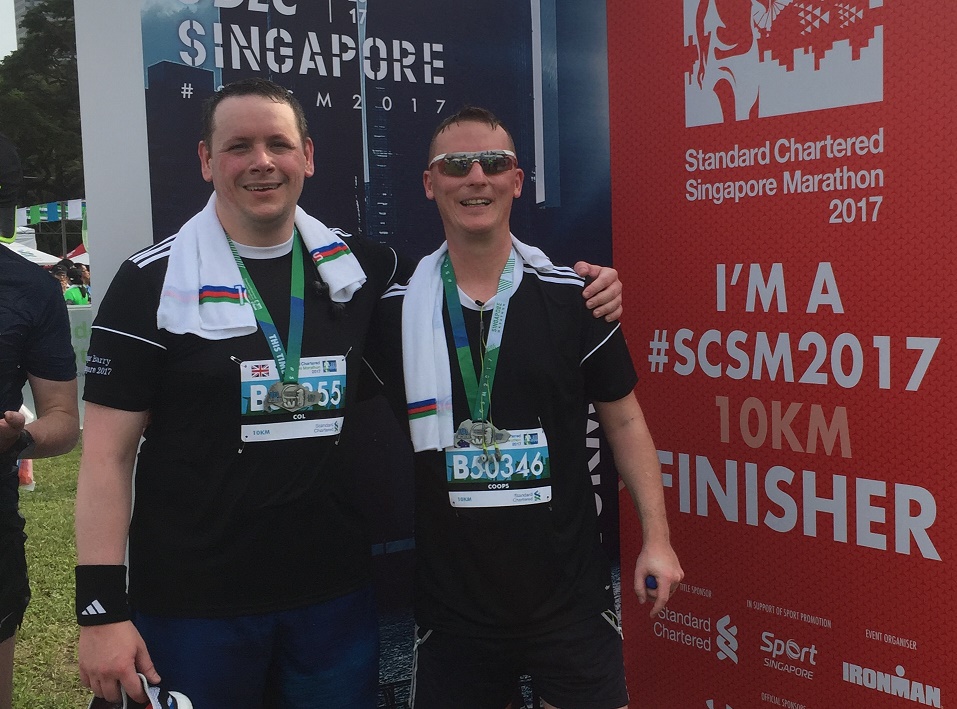 Over £2,100 was raised for Sue Ryder Aberdeen and over AU$1,400 for Cystic Fibrosis Western Australia so it made all the hard work and sweat worthwhile.

Dylan was also selected as ambassador for 65 Roses (Cystic Fibrosis) last year. The professional rugby player Nathan Charles, who now plays in the UK, is a similar sufferer and they used to attend events together when Nathan played for the Western Force here in Perth. Except for the two hours of physio and mountain of tablets Dylan consumes each day, he is a completely normal kid. In fact, both boys are the first leg peggers in the family since Davie Cooper (my cousin who played for Rangers and Scotland), so family back in Scotland like to keep track on how they are progressing!

There’s also the fact that Dylan, who’s now nine, deals with the condition very well and is a real inspiration to us all. Well, apart from when he runs rings around me on the football pitch!