With her One Young World movement, Kate Robertson is championing the young figureheads who’ll shape the future.

The needs of society and those of business are as co-dependent as the blades on a pair of scissors. That’s the core philosophy that drove Kate Robertson, former Co-Global President of advertising giant Havas Worldwide, to co-found One Young World, a not-for-profit organisation that champions and connects young leaders from around the world.

At One Young World’s annual summit, which assembles attendees from 190 different countries, youthful trailblazers – including the winner of this year’s ICAS Top Young CAs competition – will rub shoulders with leading speakers and debate innovative solutions to global problems. Sadiq Khan was among the speakers at last year’s London event, HRH Duchess Of Sussex among the attendees.

For me leadership is everything and the idea that the world can be brought together as a human family is my emotional lodestone.

“The driving force was to find something we could get our teeth into that would make a lasting difference,” Robertson says of One Young World’s founding a decade ago. “For me leadership is everything and the idea that the world can be brought together as a human family is my emotional lodestone.”

While the South Africa-born Robertson’s mission is inherently optimistic – citing Nelson Mandela and Archbishop Desmond Tutu as prime examples of leadership at its most advanced, she firmly believes that there is plenty of similar young talent out there – she’s emphatic about the responsibility existing leaders have to drive the requisite cultural shift. “We live in a turbulent time and an era where politicians, CEOs and powerful figures, need to sit up and listen to young leaders to ensure that the positive change they demand actually happens,” she says.

This, she believes, could help mean leadership succession equating to progress, as well as a recalibration of business’s moral and ethical compass. “I’ve always felt there were vacuums of good leadership around the world and whenever it occurred, there were consequences beyond what was immediately foreseeable,” says Robertson, who has also worked as a judge for the British Sports Industry Awards and the Barclays Global Citizenship Awards. “From the housing crisis to the financial crisis, the lack of jobs and a culture of spiralling debts, it’s the young who ultimately lose out because of poor governance by those in power.” 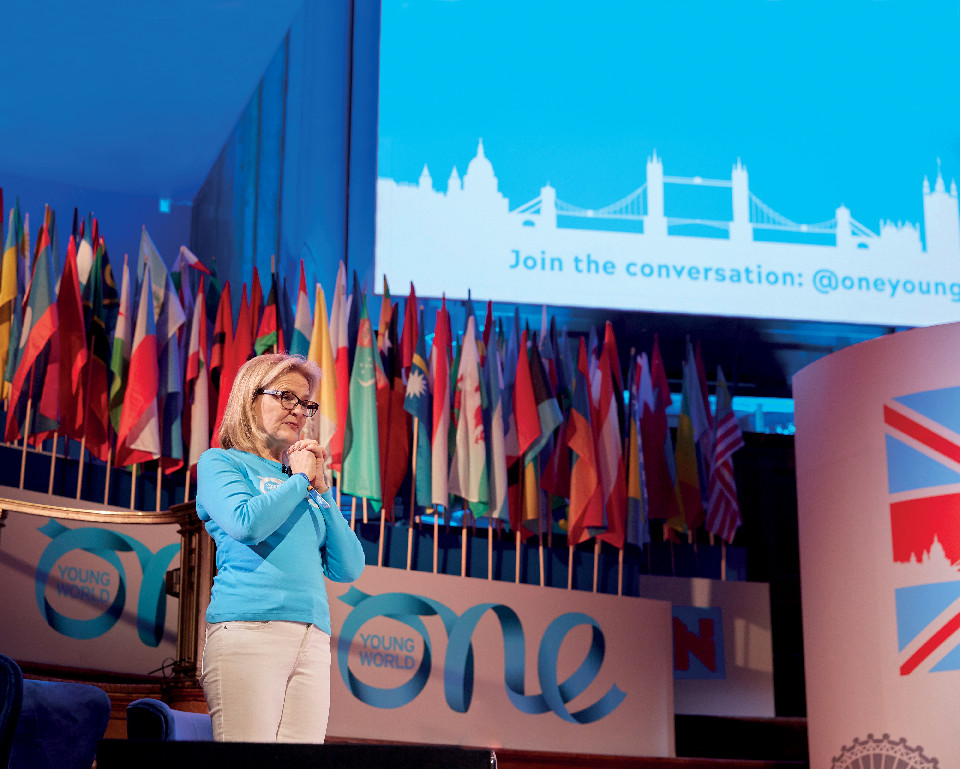 An obvious example of this – and of the beneficial long-term effects of tomorrow’s zeitgeist-forgers having different priorities to today’s – is the issue of climate change: something she says most global leaders have failed to do “a bloody thing about”.

“Nobody is exempt from that charge. At One Young World, we have never met a young person, anywhere in the world, who doesn’t look at us [the older generation] and ask, ‘Why didn’t they sort it out?’ That is our generation’s total failure. Climate change will dominate human history. Whether the human species survives on this planet or not hinges on that.”

And, arguably, if progress is based on the exchange of ideas – and human history would suggest that it is – then One Young World and its annual summit are surely a fierce wind in the sails when it comes to change. “The fact that every single country in the world is represented is unique – you won’t find that at any other conference in the world; and other than the Davos World Economic Forum and the UN you never see such a gathering of prestigious and famous figures,” she says. “We have the largest corporate footprint of any conference and in addition, just as importantly, the delegates represent every sector you can think of from NGOs to education, from politics and government to business.”