BBC journalist Carrie Gracie made headlines herself after resigning from her post in 2018, citing a secretive and discriminatory culture of unequal pay along gender lines. Here’s her story – and her advice for business leaders…

The year 2018 marked an important milestone for women. This was the centenary of the women’s vote, and among those celebrating the landmark was the BBC: while Radio 3 broadcast a new choral work called The Pankhurst Anthem, Lucy Worsley fronted a drama-documentary telling the struggle of women’s suffrage, BBC North West screened its profile Emmeline Pankhurst: The Making Of A Militant, BBC News gave us the mini-report Suffragettes: The Truth about Force Feeding – and there was even a “Pioneering Women Special” edition of Antiques Roadshow, which promised to “uncover the sacrifices and celebrate the victories of the huge range of pioneering women who have shaped our nation”. All very commendable. Unfortunately, Auntie Beeb appeared not to have received the memo about walking it like you talk it.

At the beginning of the year, the award-winning journalist Carrie Gracie resigned from her job as BBC News’ China Editor. En route to the corporation, the Oxford graduate and fluent Mandarin speaker had at one point run her own restaurant before joining the World Service, and soon became a roving correspondent, reporting from various far-flung corners of the globe. But by January 2018 she was stepping down as editor and preparing to return to her old post in the BBC newsroom. What prompted this decision? Simply, unequal pay for women.

Among the BBC’s international editors, she was paid £135K, less than US Editor Jon Sopel (£200,000- £249,999) and Middle East Editor Jeremy Bowen (£150,000-£199,999) – figures that might never have come to light had the BBC not been forced to reveal its top presenters’ and managers’ salaries six months previously. As Gracie wrote in an open letter to BBC viewers, “The Equality Act 2010 states that men and women doing equal work must receive equal pay. But last July I learned that in the previous financial year, the two men earned at least 50% more than the two [female international editors]… For the first time, women saw hard evidence of what they’d long suspected, that they are not being valued equally.”

Encourage men in your workforce to feel proud of belonging to an organisation that takes gender equality seriously. Support them to be advocates for equality at work.

Citing a “secretive and illegal pay culture”, she disclosed that up to 200 female BBC staff had made pay complaints, only to be told there was “no systemic discrimination against women”. She had refused a £45,000 pay rise as it still left a “big gap” between her and her male counterparts – all she wanted, all she would accept, was equality. That June, the corporation agreed to pay her equally with male presenters, and give her years of back pay (£361,000), which she donated to the Equal Pay Advice Service and the Fawcett Society. “It is a century since women first won the right to vote in Britain,” she concluded. “Let us honour that brave generation by making this the year we win equal pay.” Her 2019 book Equal: How We Fix the Gender Pay Gap details her personal experience and suggests how women can fight for equality in the workplace. In a year in which Newswatch presenter Samira Ahmed won her claim in another BBC equal pay dispute, let us hope such success stories continue.

In her book, Gracie offers advice for employers. “It is hard to give advice,” she admits. “Every individual and every workplace is different and the way we respond to workplace inequality may be different at different stages of our lives. I start with employers because they have the greatest power to make change fast.” 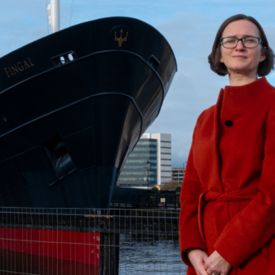 Forth Ports: A safe haven in choppy Brexit seas