All of a sudden, somebody grabbed hold of me. A bag was put over my head and I was shoved into a vehicle. We drove for a short while, then I tumbled out. My abductor then ordered me to walk to a nearby building. I sat down…”

Training for a chartered accountant’s role doesn’t normally look like this. Usually, it involves getting to grips with cost-benefit analysis or figuring out how to formulate a cashflow statement, not being bundled into a car with a bag over your head. But the role Victoria Roos was preparing for was no ordinary accounting job: it involved being sent to some of the world’s most troubled places for Mercy Corps, a nongovernmental aid agency that has delivered humanitarian assistance to more than 220 million people across the world. Her day-to-day tasks may not differ much from those of an accountant back home in Scotland (a trial balance is the same wherever you are in the world), but the locations she works in carry a very real risk of her being injured, kidnapped or worse.

“Luckily, my ‘abductors’ then told me the ordeal was over and they took the bag off,” says Roos, casting her mind back to the hostile environment awareness training (HEAT) she received before her first posting to Tunisia in A 2016. “The experience was done to make you think about coping mechanisms, and how to make yourself more resilient… as my eyes adjusted to the darkness in the shed, I could see many fellow trainees visibly shaking…”

It is challenging, but you really do feel like you’re helping to make a difference.

Since then, Roos has had placements in Jordan, working to support operations in Syria at a time when much of the country was controlled by ISIS, and currently works as finance director for Mercy Corps in Uganda. It raises the question: why leave a comfortable role (before Mercy Corps, Roos was at Edinburgh’s Chiene + Tait) to work in such dangerous destinations?

“It is challenging, but when you are finding new ways of making the programme more efficient and sustainable, or the team better, you really do feel like you’re helping to make a difference,” says Roos.

Indeed, the aid agencies such as Mercy Corps need accountants every bit as much as they need engineers, project managers and water and sanitation specialists. Accountancy may not top many people’s list of life-saving professions, but for aid organisations, they are absolutely indispensable: they can assess budgets, administer the cash-transfer programmes, ensure that aid and donations get to the right places to help those war-ravaged areas transition to financially sustainable futures. 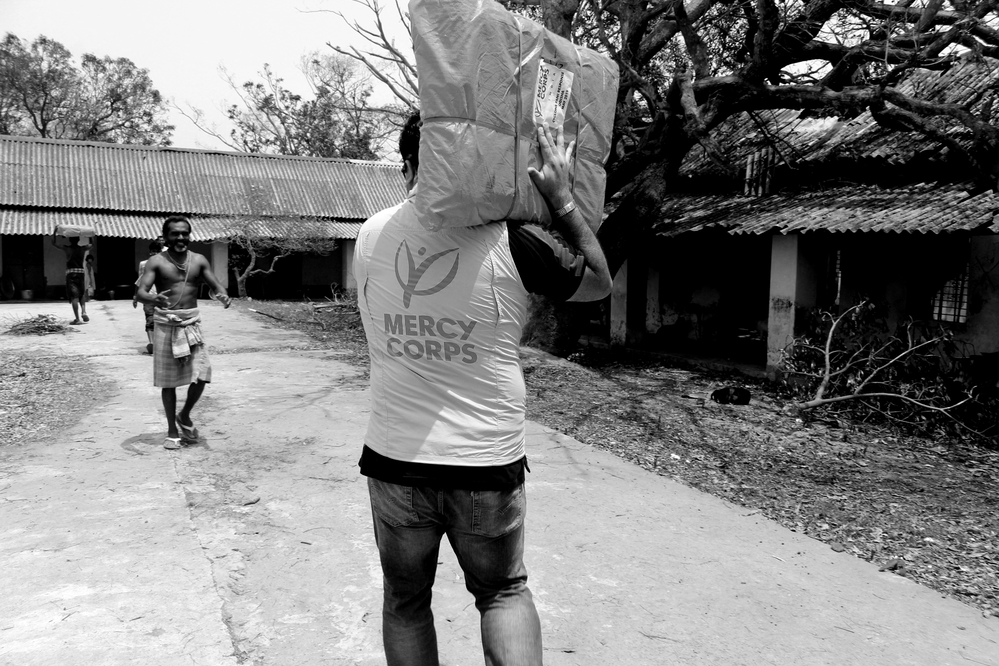 The humanitarian aspect came to the fore during Roos’s two-year stint in the Middle East, where she worked first as Finance and Compliance Manager for Syria programmes, then Subawards and Compliance Director for the region. When she describes the work she did there as “lifesaving”, she’s not exaggerating.

“It entailed ensuring all the funds we received from donors were distributed to local organisations who could deliver the aid to those who needed it,” she remembers. “They would distribute the food baskets and hygiene kits: life-saving stuff.”

Roos’s remit included Syria, still one of the most dangerous places on the planet. During her time in Jordan, ISIS attempted to establish its caliphate. Civilians were at risk from terrorism, as well as from government bombing raids using chemical weapons. Millions of people have been displaced by the ongoing conflict, triggering a refugee crisis. In terms of financial reporting, it was absolute chaos.

We have a real responsibility to ensure the money goes as far as possible – and reaches the most vulnerable people. Transparency with donors is crucial.

“Most of the areas [where aid was delivered] were besieged, so we couldn’t transfer resources. It causes big problems when receiving documents. Working in places such as Syria means being as compliant as possible and doing what donors require, even though it’s a warzone and people are in real danger.

“In situations like the Middle East, you’re constantly having to adapt. One day, you’ll be writing a civil war report and trying to kick off an activity that relates to distributing food baskets in a warzone; the next you’ll be cancelling that order because the area is no longer accessible so you have to reprogramme that money to other organisations. So, yeah, it was tough. My colleagues and I still can’t believe we managed to get through those times or the things we achieved.”

It was in an Edinburgh bar in 2012 that Roos first encountered Mercy Corps. At the time, she was a trainee CA working at Chiene + Tate, having graduated from the University of Strathclyde in 2009. She was chatting to a friend of a friend, recently returned from Uganda, where she had worked for Mercy Corps training local teams in finance and compliance. Roos was spellbound. “I remember thinking, ‘That sounds amazing, I’d love to do something like that,’” she says.

Contact details were exchanged. Six months later an email popped up in Roos’s inbox. It was from the Mercy Corps employee, who told her of a new job there. Roos checked with ICAS that she had enough hours of training, and applied.

Joining Mercy Corps, in summer 2013, Roos initially worked in its Edinburgh office as Senior Finance Officer for Eastern and Southern Africa. The job was largely deskbound, reviewing country accounts and uploading them to the system or reporting to donors. But it did include occasional travel; within two-and-a-half years Roos had visited Tunisia, Kenya, Ethiopia, the Democratic Republic of the Congo, Rwanda and Uganda.

Originally founded as the Save the Refugee Fund in 1979 to help victims of Pol Pot’s Cambodian genocide, Mercy Corps has since expanded to deliver humanitarian aid wherever it’s needed: HIV/AIDS prevention, domestic violence, education and agro-industrial development. It’s been present at some of the most harrowing conflicts and disasters of the past 40 years: the 1990s Balkans, Afghanistan, North Korea, the aftermath of the 2010 Haiti earthquake and 2017 Hurricane Maria, and helping refugees in Greece during the recent migrant crisis.

Roos’s first posting was to Tunisia in 2016, the year following the Sousse terror attacks and half a decade after the Arab Spring. After her HEAT training – where she also learned how to change tyres and administer first-aid – she arrived in Tunis. Her job there also covered Libya, wracked by militia fighting following the downfall of Colonel Gaddafi.

Accounting and finance have a lot to offer because some of our most important values – integrity, professionalism and efficiency – are even more crucial in the charity sector.

“There was high unemployment in Tunisia at the time, so there was lots of energy and opportunity as officials knew they had to create [an economy],” Roos remembers. “So, my role involved lots of financial inclusion – training to get people to start businesses, such as creating business plans and securing funding.”

Aside from teaching Tunisians entrepreneurial skills to kickstart their economy, Roos’s work involved “programmes related to business startup grants, such as the distribution of cattle and sheep, crop-growing, water and sanitation programmes or education around gender roles. These were intended to be more sustainable than distributing food baskets.”

CAs can play a vital role

It is proof CAs can play a vital role in shaping the future of troubled places. “As a profession, accounting and finance have a lot to offer because some of our most important values – integrity, professionalism and efficiency – are even more crucial in the charity sector,” says Roos. “We have a real responsibility to ensure the money goes as far as possible – and reaches the most vulnerable people. Transparency with donors is crucial."

In April 2019, Roos took up a new assignment, as Finance Director in Uganda, which sees her running a team of 26 people spread across 11 field offices in the East African country. She’s currently working on a huge $41m (£31.8m) project helping civilians in the deprived region of Karamoja, as well as a fintech pilot scheme for refugees displaced by the South Sudanese conflict. The latter enables participants to download an app containing a ‘Humanity First Token’, which can be exchanged for goods from local vendors. Funds can be transferred straight to the vendors, who can then exchange the tokens for cash, or they can be stored in the refugee’s ‘trust wallet’, giving them the security and convenience of a bank account while bypassing the sort of documentation usually required to open one.

It’s hard to switch off because you’re working so hard to [help], it becomes a massive part of your life.

Understandably, given what she’s witnessed, Roos finds it hard to unwind: “Even though you’re not in the country, you still feel responsibility. When some of your best friends are Syrian with family members still missing, it becomes very real. Many have no documents or are refugees in other countries and struggling to find jobs, despite being highly educated and skilled… It’s hard to switch off because you’re working so hard to [help], it becomes a massive part of your life.

“There’s definitely a demand for skilled finance professionals in international development and our CA qualification is something easily transferable worldwide. It’d be amazing if more experienced CAs went into the charity sector. It’s one of the most rewarding careers, but more importantly, there are many vulnerable people who need our support.”

Find out more about Mercy Corps at Mercycorps.org.uk.