High political drama accompanies the Budget (Scotland) (No 2) Bill, and Donald Drysdale explains some of the uncertainties involved.

Should we pay more tax?

In January, ICAS and CIOT jointly hosted a ‘Big Tax Debate’ in Edinburgh.One of the key sentiments expressed at the event was that many Scottish taxpayers might be willing to pay slightly more tax if this meant that they would enjoy better public services.

An article in The Economist, also in January, reported a similar phenomenon across the UK – suggesting that taxpayers’ traditional opposition to tax rises is softening.  This seems to be driven by widespread acknowledgement that key public services – for example the NHS, the emergency services and the armed forces – are no longer able to cope.

ICAS members represent a wide range of different political persuasions, so their views on the size of the state and how it should be funded will vary.  However, for Scottish taxpayers this much seems certain: that for a while at least, they are likely to be paying higher taxes than others elsewhere in the UK.

On 14 December Scottish Finance Secretary Derek Mackay delivered his draft Scottish Budget for 2018/19 to the Scottish Parliament. His spending proposals included, among other things, lifting the 1% public sector pay cap to give a 3% rise to those earning up to £30,000.  To pay for this he planned to set the Scottish higher rate threshold at £44,273, compared with £46,350 which Chancellor Philip Hammond had proposed for taxpayers throughout the rest of the UK.

Since then the implications of Mackay’s public spending and public borrowing proposals have been scrutinised by parliamentary committees, and on 25 January the Budget (Scotland) (No 2) Bill was introduced, seeking parliamentary approval for those commitments.

On 31 January in the Stage 1 debate on the Bill in the Chamber at Holyrood, Mackay announced that he had negotiated with the Greens for the votes of their MSPs to get his Budget through.

Mackay also explained how this extra spending would be funded by further tax receipts.

To take an example, in 2017/18 a Scottish taxpayer with earnings of (say) £47,000 is paying £400 more income tax than a UK taxpayer outside Scotland.  Following the Scottish Budget in December, this differential was expected to increase to £625 in 2018/19.  However, as a consequence of Mackay’s latest announcement, it is now likely to be £794.

Given that the higher rate thresholds only began to diverge in 2017/18, the differential of nearly £3,000 in 2018/19 is already significant. While political expectations vary, many high earners fear that this gulf can only become wider in future years.

In a report on the draft Budget, published on 26 January, Holyrood’s cross-party Finance and Constitution Committee noted that there is now a much greater degree of volatility and uncertainty in relation to Scotland’s public finances.

The Scottish budget is more directly dependent on the performance of the Scottish economy relative to the performance of the UK economy.   The Committee noted that while per capita GDP growth in Scotland has largely tracked that of the UK as a whole since 1999, a gap has begun to appear over the past two and a half years which shows lower growth in Scotland.

Looking at 5-year forecasts up to 2022, there are differences between the respective pictures painted by the Office for Budget Responsibility and the Scottish Fiscal Commission. The SFC’s forecast is more cautious than other economic forecasts for the Scottish economy and slower than the OBR’s forecast for the UK economy.

In spite of these forecasting variances, the SFC’s forecast implies that growth in Scottish income tax revenues will exceed the growth of the block grant adjustment for income tax – a key factor in determining the size of Scotland’s budget.  However, any forecasting error could mean that there are risks to public finances, particularly if income tax revenues do not grow as strongly in Scotland as in the rest of the UK.

The Finance and Constitution Committee has called for tax revenues to be monitored closely by the Scottish Government, and for HMRC to publish monthly outturn data for Scottish income tax.  It regards this information as vital to provide the transparency needed to ensure public confidence in the operation of the new financial powers and the Fiscal Framework.

On 7 February the Budget Bill went through its Stage 2 process when amendments were agreed by the Finance and Constitution Committee, and an amended version of the Bill was published the following day. Contrary to popular belief, the Scottish income tax rates and thresholds for 2018/19 are still not fixed, and may depend on political shenanigans yet to take place before the Scottish rate resolution is finally passed.

The resolution is due to be debated at Holyrood this afternoon.  To be effective it must be passed no later than 5 April. 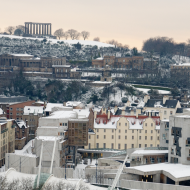