Does a matchmaking service fall under the consultants’ services provisions (VATA 1994 Sch4A para16(2)(d)) so that supplies to non-taxable persons outside the EU fall outside the scope?

If you enjoy guessing the outcome of tax cases as soon as you have read the first paragraph, then Gray & Farrar International LLP(G&F) v HMRC will be up your street. The issue is simple. The appellant ran an exclusive matchmaking business and claimed its service fell within “the services of consultants, engineers, consultancy firms, lawyers, accountants and other similar services as well as data processing and the provision of information”.

If it could convince the Tribunal, then its services to non-taxable persons who reside outside the EU would be treated as made outside the EU and thus outside the scope of VAT. Unsurprisingly, hitherto HMRC had been unconvinced and had raised assessments on the appellant.

When the Tribunal took stock of the battlefield between HMRC and appellant, they found a reasonable amount of common ground. There was no dispute between the parties that G&F provided a single composite supply. There was also broad agreement based on past case law that (a) consultants supply advice based on a high degree of expertise and (b) that included specialist and expert advice by someone with extensive experience/qualifications on the subject. The Tribunal felt (b) hit the nail on the head because advice given by a person with relevant experience which falls within the domain of that experience is specialist or expert advice. There was no need to ask whether the advice itself was in some way specialist or expert.

There was agreement on how the business operated. G&F interviewed all prospective clients for approximately 2 hours before preparing a brief describing the client and the characteristics of the person he/she was seeking. Once the brief was approved, G&F offered introductions from its network of contacts. G&F then followed up with weekly calls, and advice and coaching might be offered within those calls. The managing partner stated that she alone was responsible for matching one client to another. She claimed she did not deputise others or use computer algorithms for that task. However, she did not carry out all of the interviews herself or make all of the weekly follow up calls.

The managing partner was a key witness, but she had mixed success in swaying the Tribunal. Her evidence that she had matchmaking expertise was accepted. The Tribunal acknowledged her years of experience and accepted that she could identify personality traits relevant to the selection of a suitable partner based on her intuition and her reading of body language and general approach.

However, her role in post introduction liaison and provision of advice and coaching was held to be less than she portrayed. She was found to be hesitant in offering figures on how her time was spent and at times figures changed from what she had volunteered before. HMRC landed a convincing blow when they used her estimates to produce an annual total for her personal input since this was substantially higher than would be possible with the 60-hour week she claimed to work. The consequence of this was that the Tribunal was united in concluding that the role of her assistants, who changed over time and were not held to share her expertise, had been underplayed.

The Tribunal were struck that continuing post introduction contact with clients differentiated G&F from an online dating service where no support was given. It was an important feature of G&F’s supply from the perspective of clients and not merely incidental.

However, the two members of the Tribunal disagreed on the impact of this factor. The Tribunal Chairman considered the assistants, by regular contact with the client, provided in a “readymade confidante for the client” with whom he/she could discuss hopes and concerns for relationships.  Although he accepted that the managing partner could step in to provide expertise, he concluded the client obtained support and informal advice from the assistants. This was not sufficiently inconsequential to say that it was just part of the managing partner’s advice that a person might be suitable.

Where a Tribunal consisting of two members is not unanimous, the casting vote goes to the Chair. Therefore, the appeal was dismissed (but everyone who plays the game of guessing outcome after reading paragraph one has the comfort of finding some support for their view.) 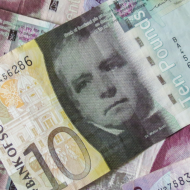