Justine Riccomini explains what is happening in a recent IR35 case.

Back in early 2017, the television presenters Tim Willcox, Joanna Gosling and David Eades, three out of over a hundred workers targeted by HMRC who had traditionally contracted with the BBC as freelancers, were presented with a collective tax bill of £920,000. This was part of HMRC’s clampdown on individuals providing services ‘off payroll’, through intermediary companies instead of being classified as employees, known by the summary term as ‘IR35’.

The dispute reached the first-tier tax tribunal (FTT) in May 2018, and the decision was released on 17 September 2019. The three presenters argued they had been pressurised into each setting up a limited company, and invoicing the BBC through these intermediaries, back in 2003/04, prior to which they had simply been working under freelance, self-employed (sole trader) contracts.

As expected, the terms of each of the contractual arrangements as well as the standard “badges of trade” were examined for each of the presenters, with substitution and editorial control being discussed during the presenters’ evidence-giving. Each of the presenters put forward the general argument that they considered themselves to be self-employed. As expected, HMRC put forward the arguments that the presenters were each subject to significant amounts of control, supervision and direction by the BBC.  The substitution arguments were side lined somewhat, due to the complicated nature of the arrangements making this something of a grey area.

In a fairly lengthy decision document (177 pages), due for the most part to the fact that there were three appeals being heard as one, the tribunal found for HMRC in all three cases by way of a casting vote.The presenters were adjudged not to have been negligent due to having sought professional tax advice, thereby limiting the time limit to 4 closed tax years.

Carelessness – under the spotlight

The negligence or carelessness point was considered in some depth so as to establish the number of years’ back taxes in question, which is the point which many accountants and tax advisers may consider to be directly relevant to them in the context of their own service provision to clients working though intermediary companies. It is worth reading the decision for this section alone, as the discussion of the extent to which the presenters relied upon their professional advisers, together with the quality and standard of rationale, reasoning and professional expertise deployed by each professional adviser stretches to approximately thirteen pages (pages 165-177). Whilst the judges were ultimately sympathetic to the quality of the advice given, it is important to note that the scrutiny placed on each aspect of the advice during the hearing was substantial and the professional reputation of each adviser was in the balance.

Television presenters have had mixed fortunes under the IR35 clampdown – Lorraine Kelly won her case, as did Kaye Adams; yet Christa Ackroyd lost her case and this has been confirmed by the Upper Tribunal. The tribunal judges in the Willcox, Gosling and Eades case found for HMRC only with a casting vote, because the tribunal could not agree on whether the presenters should be inside or outside of IR35. It seems even the judiciary is finding difficulty in drawing a cigarette paper between these cases in terms of determining status, but that did not stop the Tribunal from criticizing the BBC, stating that the BBC acknowledged the three presenters had been ‘forced’ to contract through personal service companies. However, due to the non-binding nature of FTT decisions, and the importance of facts in each individual case, it is likely further diverse decisions will ensue, which helps neither taxpayers nor advisers.

Please note the following seminars at the Glasgow and Edinburgh Tax Discussion Groups:

Both sessions will be delivered by Derek Francis of Terra Firma Chambers, and will review the underlying case principles based on the burgeoning recent case law – Christa Ackroyd, Albatel (Lorraine Kelly) Big Bad Wolf (Robert Glenister) and much more.

Edinburgh: 21st November 2019 – to register: Registration for each seminar will commence at 12.30pm to start at 1pm. There is no charge for attendance, however booking is necessary - to reserve a space at this event email emma.potter@terrafirmachambers.com 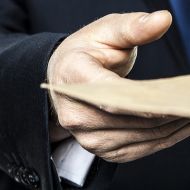 ICAS responds to HMRC consultation on IR35 in the private sector