Justine Riccomini examines how employers may have been unwittingly sucked in to HMRC’s criminal tax evasion regime and what they might do to prevent it.

It hasn’t passed me by that HMRC has enhanced its employer compliance function of late by investing heavily, which has yielded an additional £820m (or 16%) on payroll related inspections in 2016/17 compared to the previous year.

Without doubt, employment taxes are once again facing renewed compliance focus after some years of relative inactivity, with the added sting in the tail of NMW inspections, which HMRC administers on behalf of the Department for Business, Energy and Industrial Strategy (BEIS).

Now employers are becoming conscious of the new “Corporate Criminal Offences - read on.

Much ado about nothing?

Without wishing to create unnecessary work for employers, who have enough to do, readers should note this new legislation potentially creates uncharted waters for employers to sail in.

It may be a good idea for employers to consider undertaking a review of their procurement and payment protocols - this can be done internally, perhaps by HR/Finance as part of one of their existing annual processes, using the HMRC guidance, which includes a useful summary of what businesses can do to undertake a risk assessment.

What are the new offences?

Two new criminal offences, applicable to companies and partnerships, were introduced by the enactment of the Criminal Finances Act 2017. They are:

The legislation is quite narrowly drawn, and whilst the burden of proof of compliance initially appears to rest with the employer, HMRC has to prove an offence has actually taken place.

What are the three stages of committing an offence?

According to the guidance note issued by HMRC, there are three key stages which build up to the offence being committed.

HMRC’s guidance clearly states that where the first two offences are committed, the third offence is committed by default unless the business can show it implemented reasonable procedures to prevent this happening.

How can an employer become vicariously liable?

According to the HMRC guidance, an employer can be vicariously liable even where the senior management of the business was not directly involved / aware of an offence being committed.

Any criminal acts carried out by “'associated persons” (see below) are caught – including the offence of “facilitating tax evasion by others”.

HMRC needs to establish that a person “associated” with the employer has criminally facilitated the tax evasion of another person by way of a deliberate act (this could be by turning a blind eye to something like their employment status).

Being able to demonstrate that reasonable steps have been taken will go a long way to providing a defence.

What is an “associated person”?

“Associated persons” are employees, agents and other persons who perform services for or on behalf of the business, such as contractors, suppliers, agents and intermediaries.

Any employee regardless of age, length of service or status within the business could perpetuate an offence under the corporate criminal offences regime.

A secondary but no less important associated person is an agency who may be tasked with finding suitable persons to undertake work.

The agency could facilitate an offence, and this would become an automatic vicarious liability of the employer. Then there are the contractors and intermediaries themselves.

If an employer decides to complete a risk assessment to identify the risks within existing policies and procedures, employment tax risks should ideally be considered amongst those risk areas. Where risk areas arise, the business should begin to implement changes to correct and minimise/mitigate risk.

This could include staff training and revised policy manuals. Businesses with high staff turnover, high volumes of low-paid workers and contracts of employment which opt out of Working time Regulations could be included, as well as those who have high levels of procurement using agencies or intermediary businesses.

However, this is something most businesses should be doing anyway to prevent fraud and eradicate unwanted or sloppy internal practices and controls.

What are the sanctions?

Whilst this legislation is as yet untested in the courts, it is clear that severe consequences such as unlimited financial penalties, confiscation orders, serious crime prevention orders, regulatory and governance issues and reputational damage could ensue for those found to have committed an offence. This can potentially affect companies and partnerships across all sectors

The Government’s focus on employment status and National Minimum Wage enforcement (which also carries criminal sanctions in some cases) is figuring high on its agenda, and all employers should be vigilant and ensure they are reviewing their procedures in terms of corporate criminal offences.

Criminal sanctions represent a whole new ball game for employers and could present a particular risk for employers with large numbers of “off-payroll” workers.

The sanctions also interact with other penalty legislation for employers, rather than replacing it. Employers should seek guidance on this from advisers if they do not feel confident of being able to address it adequately on their own. 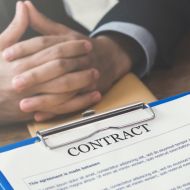