6. There is only one set of statutory accounts.

7. Legislative references should be tailored to the circumstances of the charity.

9. Examiners and auditors shouldn’t rely on a single point of contact at a charity.

10. Change is the only certainty.

6. There is only one set of statutory accounts

It is normally a requirement for a charity to file its full statutory accounts with the relevant regulators. There are exceptions: certain charities in England and Wales have filing concessions and while charitable companies are not prohibited from filing filleted accounts, these are not really appropriate (see Tip 4: Charities are not entitled to the same concessions as private companies).

The group accounts are the charitable parent’s statutory accounts.

7. Legislative references should be tailored to the circumstances of the charity

The audit requirements for charities can be fiendishly complicated depending on the circumstances of the charity. The requirements in England and Wales are particularly difficult to navigate especially when it comes to charitable company audits.

Key to success is identifying all the legislation which is relevant to the external scrutiny of a charity.

ICAS has prepared the following guidance which should assist charity auditors and their clients identify the underlying legislation:

OSCR is planning to update its independent examination guidance shortly.

The UK charity regulators are keen to emphasise the importance of trustee boards taking ownership of the Trustees’ Annual Report (TAR). The TAR is an opportunity to tell the charity’s story. It doesn’t have to be prepared solely to comply with the legislation, although this is important too.

Independent examiners and auditors should refuse any requests to draft the TAR on behalf of a charity client and charity treasurers shouldn’t be left to prepare the TAR as a ‘box-ticking’ exercise.

Ideally, charity trustees should be thinking about the content of next year’s TAR in the previous financial year. If a charity is to report on its outcomes, it needs to determine what it's seeking to achieve and introduce processes to gather the relevant information from the beginning of the financial year.

9. Independent examiners and auditors should not rely on a single point of contact at a charity

While it’s not the independent examiner’s or auditor’s responsibility to detect fraud, having the accounts independently scrutinised can act as a deterrent to internal fraud. External scrutiny also increases the prospect of discovery.

Small charities don’t have the same scope as larger charities to implement and operate comprehensive internal control arrangements, such as segregation of duties. There is also a tendency for those involved in running charities to be viewed as trustworthy and beyond reproach. Therefore, it may be tempting for the trustees to rely wholly on a single individual to take charge of the finances.

It is therefore essential, for example, that an independent examiner does not rely on one person as the single point of contact and source of financial information at a charity. While such an approach does not guarantee that fraud will be prevented or detected, it will reduce the risk.

10. Change is the only certainty

Charity trustees, charity finance staff and charity advisers who are ICAS members should keep up to date with sector developments and ensure that they comply with ICAS CPD requirements. Even if your involvement with charities is not part of your day job or you only have a handful of charity clients, it is worth keeping an eye on the following websites for developments:

There is a sign-up facility on the OSCR, CCEW and FRC websites for alerts and charity-related topics are covered regularly in our daily briefing, CA Today.  Also, the Charity Commission for Northern Ireland website has a latest news section. 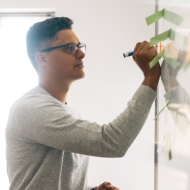 Changes to the Charities SORP (FRS 102)