Ahead of Scottish Apprenticeship Week, Christian Koch profiles an innovative course in Aberdeen that gives students the chance to gain a university degree and ICAS accreditation – and earn while they learn.

Starting out as a CA isn’t easy. For many, there’s one particularly difficult hurdle to overcome first; a soul-searching decision that can feel as if your entire life hinges on it. Should you head to university for years of BrewDog-laced fun and a nice photo for the parental mantelpiece of you donning a mortarboard, before spending a lifetime paying back loans and, in many cases, tuition fees? Or should you choose a full-time job that doesn’t entail living on a shoestring budget, but could also end with you being out-earned by smart-alec graduates?

It aims to give students the best of both worlds: a university degree from one of Scotland’s finest business schools (and perhaps an ICAS qualification), while also earning a salary in a full-time job.

“Learning doesn’t just take place in a classroom, but in the workplace too,” says Professor Elizabeth Gammie CA, Head of Aberdeen Business School, RGU and ICAS Grampian Area Network Chair. “You don’t just learn by pitching up to a lecture and attending tutorials. Most people in the workplace are constantly learning without realising it. Graduate apprenticeships recognise this and try to harness it.”

The course’s 40 students are all employed in full-time positions, in sectors ranging from food services to local government, meaning they can earn competitive salaries while training and needn’t fret about racking up the debt that saddles the average Scottish student. With the course mostly delivered online (students are required to attend classes at RGU’s Aberdeen campus for around six days a year), it’s a convenient option for any aspiring CAs based in the remoter parts of Scotland; the 2019-20 cohort are currently working everywhere from Orkney to the Scottish Borders.

“The course provides opportunities to earn a degree while working and is extremely accessible so that people don’t have to up sticks and live in a big city to attend university,” says Gammie. “It also allows people to upskill, whether they’ve just left school or been working for some years. As a university, we can provide support, build confidence and work with employers to help them develop new skills when entering the workplace.”

Apprenticeships more popular than ever

Today, apprenticeships are more popular and respected than ever. In 2018-19 more than 30,000 people started apprenticeships in Scotland; a feat set to be celebrated during this month’s Scottish Apprenticeship Week (2-6 March). For years, apprenticeships were hampered by the misconception they were only suitable for manual professions, such as plumbing or car mechanics.

Yet, today they are also available in white-collar industries, such as accountancy. Indeed, the Big Four firms all invest in apprenticeships; today some of their smartest young recruits are school-leavers who have become qualified accountants without studying full-time for a degree.

RGU’s graduate apprenticeship in accountancy builds on this. Alongside learning core accounting skills such as financial reporting, students are also primed for some of the changes set to face the industry in coming years, such as digital business.

Along the way, they’ll also develop an e-portfolio of “work-based artefacts”, such as presentations or reports they may have contributed to during their day-jobs (each student is assigned a workplace mentor, who oversees their learning in the office).

Graduates on the course can also leave with the prestige of becoming ICAS-qualified, too. Test of Professional Skills modules are studied in the fourth year, with Test of Professional Expertise in the final year. “RGU has produced many ICAS prize-winners in the past, which is impressive, given that ICAS attracts the brightest and best accountants from across the UK,” says Gammie.

There is a caveat for students who want to enrol on the course: they must have a job first (employers apply on behalf of the students, rather than the students filling out application forms). Employers benefit greatly from such graduate apprenticeships: it’s a fantastic, low-cost way to upskill their staff , retain talented workers and introduce new ways of thinking into their firms.

“Our students learn things at university that they immediately feed into their jobs,” says Gammie.

Exciting opportunity for education in Scotland

Gammie, who has spent 31 years at RGU, notes that if other educational institutions introduce similar graduate apprenticeships in accounting, it could help transform both universities and the accountancy profession.

“This is an exciting opportunity for the educational landscape of Scotland,” she says. “Yes, at the moment we don’t have student fees in Scotland, but the cost of living as a student can still add up during their four-year degrees.”

If you would like to find out more or participate in this year’s Graduate Apprenticeship scheme contact firms@icas.com. 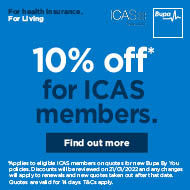