Graham Russell CA of WPP has made the world his home

Graham Russell CA went to Jamaica, aged 23, for a two-year work placement. Decades on, his itchy feet have seen him live throughout the world, now settled down in Manhattan with WPP. Businesses can only become more global, he explains.

At his home in Connecticut, Graham Russell CA feels… well, at home. Setting up anew has been integral to his career. Aged 23, Russell left Scotland for a two-year placement in Jamaica. He went on to work all over the world, eventually landing in Manhattan. On the advice of his father, Russell joined one of the “non-Big Eight”, working at a smaller firm after graduating from Aberdeen University. There he gained his qualification and swiftly moved to KPMG, where he learned how to be an auditor. When the opportunity arose, he crossed the Atlantic to Jamaica and, after settling in – a huge change at a young age – was soon promoted to managerial roles. “There was a huge advantage in being at a big firm in a smaller market,” he says. “I managed the fledgling financial practice and was offered a partnership.”

But the partnership required a five-year commitment – daunting at that age – so Russell left KPMG to join NCR Corporation, which provided cash machines, electronic scanners and point-of-sale devices cash machines, where he became CFO for Jamaica and the Cayman Islands. He spent 18 years at NCR, moving every two years – to Puerto Rico, Ohio, Miami and eventually Amsterdam, where he rebuilt the company as CFO following parent AT&T’s spinning-off of the business. To say he is used to managing change is beyond understatement.

Fast forward through roles as Global Head of Shared Services at Orange Business Services as well as pharma giant AstraZeneca, Russell was headhunted by WPP, the world leader in advertising, public relations, branding and media services, for its newly created role of Director of Business Process Outsourcing (BPO).

“Every industry, every city, every country has been a learning,” Russell says of his multi-faceted roles across sectors and locations. “I’ve learned so much in each. As long as you’re in a company with a vision and a way forward, there are always opportunities.”

And WPP’s opportunities have been transformational. Russell leads all BPO efforts, initially setting up the function and negotiating contracts for offshoring and outsourcing, mainly in India. While the role originates in back-office finance functions – accounts payable vs accounts renewable, billing and ledgers, taxes and collections – WPP’s BPO requirements have expanded over time. “We still do outsourcing, but there is more to it than just saving money,” he explains. “It’s also about processing standardisation and combining fewer ERPs [enterprise resource planning] into onshore service centres and other functions.”

Following a high-profile change in leadership in 2018 with the departure of Sir Martin Sorrell, WPP began to operate with a new strategy and new objectives under Mark Read, who had held various roles at the firm including CEO of WPP Digital, responsible for the company’s move into digital investments, and joint COO.

“It’s been refreshing to see how much his vision has changed the company direction,” says Russell, who believes WPP’s current transformation is integral to the new CEO’s strategy. “For 2020, we’re looking at a single ERP project in the US. Which is a big deal. There are currently around 25 different ERP systems in WPP’s US business. And there’s also a plan to put in place a single shared service centre for the first time in the US.”

With the global advertising sector seeing phenomenal change over the past decade, with technology leading rather than simply supporting creative execution, what does Russell see as the big challenges ahead for WPP?

“There is no doubt that digital has been the biggest driver of change in the creative industry in the past few years. So much so that Mark Read wanted to get rid of the word ‘digital’ because it’s a given – there’s no business without it. Technology is absolutely at the heart of what we do for our clients. And we now have a CTO, who is very much client-facing.”

Successful BPO is part of this transformation journey. But what about the obvious tensions between cost efficiencies, brand understanding and customer experience – especially for internal customers?

“When I get this kind of question,” says Russell, “I like to turn it around and ask: ‘Why do our clients give us their business?’ Because we have specialisms they don’t. It’s the same with outsourcing anything. You find a group of people whose focus is on being dedicated to your business. Over time they build knowledge and they’re often far more efficient than you ever could be. Their core focus is to make sure our business is well served. The companies we use do that on an industrial scale. One of the big advantages of outsourcing is when a business shrinks or grows, it’s so much easier for that need to be adjusted if we don’t have to recruit or redeploy, which is an enormous, laborious and costly task.”

Russell’s vision and pragmatism are clear. Has being around decisive, energetic New Yorkers rubbed off on him? He agrees this description is true of some businesses in New York, WPP included, but doesn’t necessarily apply across industries. “Because it is a financial capital with some of the world’s largest organisations – banks, investment houses, law firms – that tends to attract the best and brightest. Which sometimes comes with a short life cycle! That’s true in the creative industry too. There is so much creativity in New York, and where there’s a big company presence, you’ll find these qualities.”

But for this global Scot – Russell is part of a network of around 600 “informal business ambassadors” who support Scottish Enterprise and Scottish Development International – a worldwide outlook is crucial to success. “I’ve believed for a long time that businesses can only become more global. Top people who have worked around the world should have a great global outlook in terms of diversity and should become better leaders. And stakeholders should recognise the positive impact those different influences can have on a business’s bottom line.” Travelling the world, overseeing transformational change, has been Russell’s forte – supported by his ICAS training. “It’s been the foundation of my career,” he says. “Of course, I’ve had continual learning over the years, but the hardcore training you do in the first three years after graduating gives you all the theory you can recall and put into practice throughout your career. Acquisitions, group accounts, principles of tax – all things you don’t get to use on day one of your first job. But the studentships and practical training position you very well for the future.” As Network Chair for ICAS in New York and the tristate area (New York, New Jersey, Connecticut), Russell continues to fly the flag for the organisation’s 200 or so regional members, who can attend social and educational events that are great for networking and attracting new members. Making them feel at home, you might say. 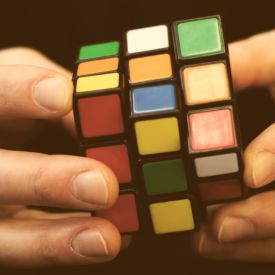 Relocating to a new country can be a positive move