Support for those facing ethical dilemmas at smaller firms

CAs work in all sectors of the economy and at all levels of seniority. It means that no two experiences are the same.

The Finance+ insight series on icas.com provides resources that help you perform your best, whatever your role. And we want to hear from you.

Sharing your story will help ICAS paint a fuller picture of what it means to be a CA in 2022, helping to improve our member offering as well as service delivery.

You can share experiences relating to ethics in a private and confidential manner by contacting ethics@icas.com

Finance professionals at smaller organisations are at particular risk of facing ethical dilemmas. Fraser Allen explores the support available to CAs – and why the profession must stand up and be counted

Despite several high-profile scandals, most large organisations have a range of protocols in place to protect against unethical behaviour. By contrast, their smaller counterparts may not have established comparable frameworks.

If you’re the accountant stuck in the middle, perhaps between two family members, it can be a very uncomfortable experience.

“Most small organisations have clear values and take ethics seriously,” says James Barbour CA, Director of Policy Leadership at ICAS. “But we’ve all heard of instances where pressure can be exerted on accountants. For instance, the CA might be ‘asked’ to ‘massage’ the accounts to make them look more appealing to users, or there may be pressure to put personal expenses through the business.

“There are many other scenarios. Take disputes within a small business. If you’re the accountant stuck in the middle, perhaps between two family members, it can be a very uncomfortable experience. You know that it’s your duty to act on behalf of the business and the public interest, but the directors are likely to want you to support their conflicting personal interests, and that may entail unethical behaviour.”

These issues are a big concern for Ken Siong, Program and Senior Director at the International Ethics Standards Board for Accountants (IESBA) and, in particular, he fears for the impact they can have on an accountant’s mental health.

“This pressure to do something unethical, either explicit or implicit, may come from colleagues or superiors, or from external parties such as customers, vendors and business partners,” he says. “It can also arise from an accountant being asked to do something that they have neither the time nor the relevant experience to do properly.

“There have always been issues of burnout in our profession and, for some, stress has been compounded by the pandemic. So, as well as sustaining the conduct and integrity of our profession, maintaining high ethical standards is important because it protects the mental health and wellbeing of our colleagues.”

We saw the dangers of the groupthink mentality during the financial crisis and we want to encourage and help CAs to stand up and be counted when they see something wrong.

The IESBA is an independent board that promulgates ethical standards in the public interest for professional accountants worldwide. At the heart of the board’s work is the International Code of Ethics for Professional Accountants, which has been adopted, or is the basis for national ethical standards, across more than 120 countries.

The UK is one of those jurisdictions and ICAS has long been active in developing best practice in professional ethics. Alongside Barbour, another firm champion of business ethics is Loree Gourley, an Associate Partner at EY who, as well being Chair of the ICAS Ethics Board, is Vice Chairman of the Board of Trustees at the Institute of Business Ethics.

“I started my commercial career with Johnson and Johnson, where its credo guides its business decisions and puts values and ethics at the heart of every decision. This has followed me through my career,” says Gourley. “For me, that interest was further developed by issues such as George Floyd, the pandemic and the climate change crisis. The ethical challenges for CAs are extending beyond traditional financial areas, and there are often shades of grey.”

Those shades of grey are why the IESBA and ICAS have set out such clear frameworks, along with practical tools and mentoring support to help CAs make the right choices when they come under pressure.

“In 2015, we launched an initiative called the Power of One to focus on the individual,” says Barbour. “Organisational culture can have a significant impact, but we wanted to make it clear that, while a CA may be the only person in a boardroom who is covered by a professional ethics code, it doesn’t diminish their responsibility to do the right thing and act in the public interest.

“That is why we  emphasised the importance of moral courage. We saw the dangers of the groupthink mentality during the financial crisis and we want to encourage and help CAs to stand up and be counted when they see something wrong.”

Governance is the single most important element of ESG.

This is complemented by the IESBA’s Role and Mindset project, which calls on accountants to apply an inquiring mind to everything around them. “Accountants should never accept information at face value, and we all know that,” says Siong. “But it’s also important that we’re clear and consistent about this and provide support and guidance to those whose professional integrity may be at risk.”
But this isn’t just about providing guidelines, it’s about encouraging an ethical culture across all areas of business. As Siong says, “Culture eats strategy for lunch.”

Ethics also features prominently in CA training, including the recitation of a public oath at the admission ceremony, stating a clear commitment to the public interest. “Building your reputation as a CA is vital,” says Barbour. “That’s why our new Finance+ insight series is kicking off with the trust and ethics theme – there is a very strong incentive for CAs to take ethics seriously from day one. If they don’t, it can have a highly negative impact on their career – and that can happen very quickly. When someone is faced with a difficult ethical choice, I often urge them to think about how they would justify their decision if they were interviewed on Newsnight. If they imagine themselves struggling, that’s a pretty clear indicator that they should reconsider their approach.”

ICAS also introduced mandatory ethics CPD for CAs in January 2020. “We were one of the first accountancy institutes to incorporate it into our CPD requirements,” says Gourley. In addition, she has developed an ICAS Ethics Board sub-committee to focus on the ethics of embedding sustainability into the governance element of ESG (environmental, social and governance). “It’s my firm belief that we rarely see an environmental or social crisis without there being a fracture in governance,” she says. “Governance is the single most important element of ESG.”

Each individual has a requirement to make small incremental change to drive a ripple effect in addressing a grand challenge.

Siong sees the ESG debate as a huge opportunity for the profession. “We’re in a time of rapid change,” he says. “Accountants are skilled at preparing information, reporting on information and providing assurance. Those are precious skills. We can play a critical, leading role in the progress of ESG – and that applies to all accountants, wherever they work.”

To encourage this, the IESBA is reviewing the code in the context of questions around, for example, climate change. “The fundamental principles will continue to apply,” says Siong. “But there is a need for more guidance to fully support accountants, so they can be seen as a go-to party for advice on climate-related issues.”

As well as other international bodies, the IESBA will be collaborating on these initiatives with ICAS, where similar discussions are taking place. From Gourley’s view, one of the strongest themes emerging from the Power of One campaign is the responsibility that lies with us all individually to tackle climate change through our personal ethical choices.

“What I learned from Cop26 is that each individual has a requirement to make small incremental change to drive a ripple effect in addressing a grand challenge,” she says. “This starts with individual decision making and having the moral courage to do the right thing, even in significant adversity.”

Gourley is under no illusion that doing the right thing is simple – particularly for CAs in smaller organisations who may feel isolated and subject to peer pressure. “That’s why ICAS has created an infrastructure with resources and tools for those who find themselves facing these stressful situations,” she says. “Hopefully, it’s comforting that the profession as a whole has the same foundation and values, and that ICAS is here to help.” 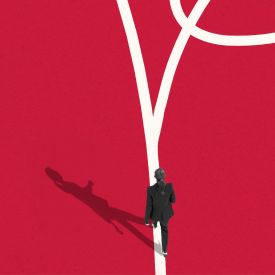