- Report of the Public Interest members

The accounting profession is facing significant challenges - from a lack of public trust in audit to the impact of disruptive technology.

In order to tackle these issues, the ICAS Council created a rejuvenated strategy during 2018. With an overarching purpose to Learn, Grow and Advance Together, Council set out the vision for ICAS to be a recognised and respected world leader in the future of finance professionals and the advancement
of the profession.

Our strategy will be delivered by balancing business as usual initiatives with new propositions. This will ensure that we continue to innovate and change in order to keep up with the pace of change in the profession and in the wider political and business environment.

2018 has seen important changes across the range of ICAS activity. The introduction of apprenticeships has been significant and while the overall student intake in 2018 fell to 801, we have continued to adapt to the changing environment, with a modernised syllabus launching in 2019.

A mutual recognition agreement (MRA) was signed between ICAS, the National Association of State Boards of Accountancy (NASBA) and the American Institute of Certified Public Accountants (AICPA). The MRA had a significant, positive impact on the mobility of ICAS members who want to work in the US and vice versa – with 12 US CPAs having taken advantage of it to date.

Last year we commenced a root-and-branch governance review to ensure that our governance and structures support the delivery of our new strategy, and the proposed changes will be taken to the membership in 2019. We also reviewed our internal operating model and organisational design, releasing efficiencies for re-investment.

The uncertainty around Brexit has been a focus of our thought leadership commentary, as has the changing environment for audit – with ongoing participation in the reviews of corporate reporting, corporate governance, oversight regulation and the scope of audit.

High-profile business issues were another important focus with our work on ethics and the Power of One remaining vital. We also launched a Challenging Conversations initiative through which we debated issues important to the profession and wider society.

We continued to invest heavily in our Digital Transformation Programme throughout 2018, with the launch of a new CRM and an extension of digital services. The coming year will see a focus on building on these new digital capabilities to improve member experience. 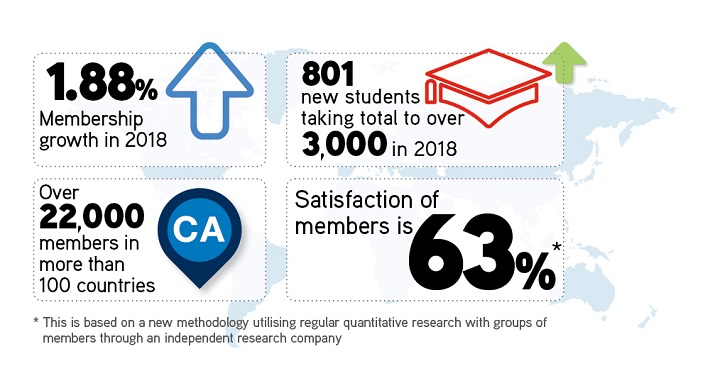 This adjusted operating surplus excludes the expensed non-recurring costs of Digital transformation of £960k (2017 - £567k) and the past service cost for GMP pension liabilities of £289k (2017 - £nil).

Of the increase in staff costs, £289k related to the one-off past service cost, arising from recent pensions case law which now requires certain schemes to make provision for a potential liability for GMP costs. Also, within Staff Costs are £783k (2017- £300k) of one-off costs related to Digital Transformation.

Although ICAS revenue from education activity shows a steady position overall there have been significant changes in the delivery models during the year. The Joint Venture arrangement with BPP ended, moving to a contractual arrangement, and additionally a range of classes are now delivered under the Apprenticeships arrangement.

Student number intake for 2018 fell by 147 to 801, primarily as a result of the anticipated ending of bespoke training programs requested by certain employers.

Excluding the impact of IFRS15 the Group net asset value increased by £700k and ICAS value by £720k due largely to the property valuation which saw an increase in the net book value of land and buildings of £1,067k.

2018 saw a fall in cash held by Group at year end to £6,173k (2017- £9,691k) with the majority of this being due to changes in working capital and the timing of receipts, with Direct Debit receipt dates falling across the year end.

The Foundation holds £1,292k total net assets and has set out a clear Reserves Policy statement in relation to these funds. 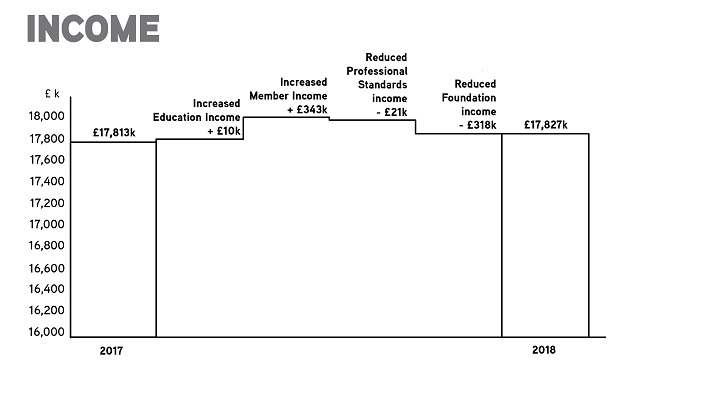 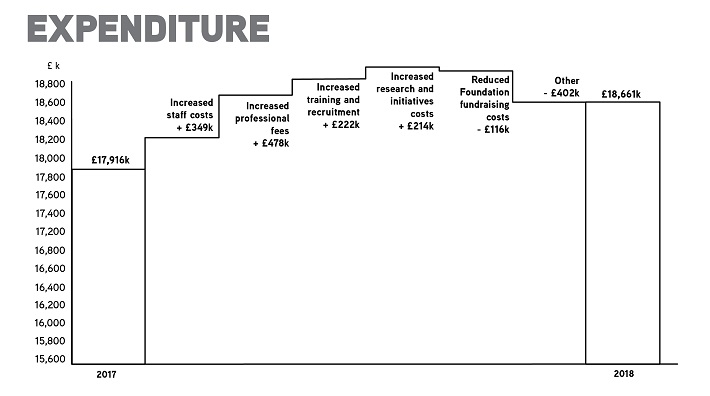 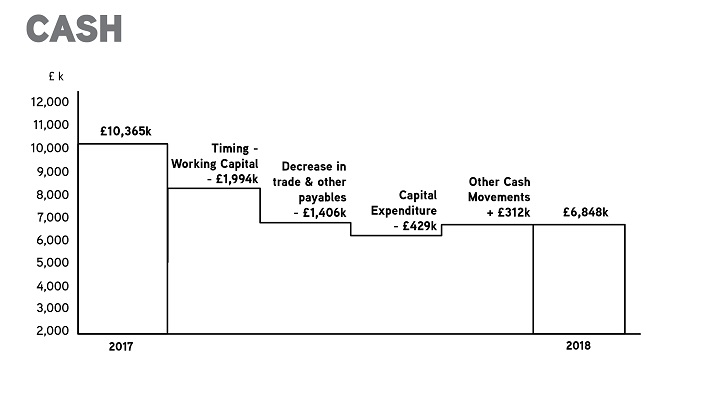 *Cash is the total of cash and fixed term deposits

ICAS operates a rigorous system of risk management to identify and assess risks and to ensure appropriate mitigating actions are put in place in line with the risk appetite.

Council closely monitors the status of the principal risks and any mitigating actions. In the review of strategy carried out during 2018 Council reviewed the principal emerging and strategic risks - these are reflected in the table below alongside key ongoing risks.

Council gave consideration to Brexit in the context of the principal risks and as an ongoing part of the risk management process. ICAS has established an Advisory Group to consider and brief members on the potential implications of Brexit, both in terms of policy input and the impact on the profession.

Council and the Executive Team monitor the potential for impacts to the organisation including macro-economic impacts.

As a Chartered Body, ICAS governance arrangements are set out in its Charter and Rules. Although the FRC’s UK Corporate Governance Code (The Code) does not apply to ICAS, Council is committed to good practice in corporate governance and seeks to apply the principles of The Code where they are relevant and proportionate to a professional membership body.

ICAS is governed by Council which has responsibility for ensuring that the objectives set out in the Royal Charter are achieved and for setting the strategic direction of ICAS.

During 2018 ICAS has reviewed its strategy. In the ICAS business model, the principal activities of ICAS during 2018 were the training and examination of chartered accountancy students, the regulation of our Members, Affiliates, CA Student Members and Firms, providing practice support and other services to our Members, and contributing to the development of the profession and business environment in the public interest.

Four Operational Boards are responsible for the key activities of ICAS. The day to day management of ICAS business is delegated to the Executive Team, comprised of the Executive Directors and led by the Chief Executive. During 2018 the new Chief Executive, Bruce Cartwright, took office.

During 2018 there were four vacant Council seats. Accordingly, for the 8-month period commencing from the AGM, the composition of Council comprised 14 electoral seats, 5 open seats, 7 co-opted seats and 5 Public Interest Members.

The Public Interest Members are not accountants and their function is to ensure that ICAS complies with its public interest responsibilities set out within its founding Royal Charter. They have prepared a separate report (see below).

In addition, to the Public Interest Members of Council, the public interest is also served by lay members who are not accountants but work within ICAS on the various boards and committees. Their role is also to ensure that ICAS fulfils its public interest responsibilities.

Council is supported in its leadership of ICAS and delivery of this strategy by a range of Boards and Committees.

During 2018 ICAS initiated a governance review to ensure the governance arrangements advocate best practice, represent the diversity of the ICAS membership, align with the purpose, strategy, culture and values, and can make a positive contribution to the future success of ICAS.

The review is comprehensive and will be completed in the first quarter of 2019, with proposals for change presented to the membership for approval in general meeting. If approved the proposals will be implemented during 2019.

Diversity of ideas, skills, regional and industry experience, knowledge, ethnicity and gender throughout ICAS’ membership is very important for the continuing long-term success of the profession.

The Governance Review has included consideration of how to ensure ICAS captures the focus on diversity within the governance arrangements going forward. This also applies when it comes to ICAS internal staffing composition and policies, as well as the composition of Council and the Boards.

Further details of ICAS governance are published on the ICAS website.

Report of the Public Interest members

Public trust in the accountancy profession continues to be an overriding issue of concern to ICAS. Trust has been further compromised by the failure of a few major companies over the past year. The strengthening of trust continues to be central to the strategy of ICAS. This has to be correct, because we believe that public trust will determine the future of the profession.

Recent initiatives to strengthen public trust in audit started in 2016 with the EU Statutory Audit Regulation, and Directive (which was implemented into UK legislation in June 2016). Over the last twelve months, we have witnessed a desire for further reform, commencing with the review of the Financial and Reporting Council by Sir John Kingsman and the market study undertaken by the Competitions and Markets Authority.

The proposed reform of regulation and competition has also led to renewed focus on the audit expectation gap, and the scope of audit. The review of the future of audit by Sir Donald Brydon will report later in 2019 and is widely anticipated to help set a framework for the future.

We consider that ICAS made important contributions to the Kingman Review, and ongoing debate around the future of audit (and competition to provides audit services to Public Interest Entity companies). We encourage the Institute to continue to give priority to this work.

ICAS has continued to engage with the crucially important issues arising from the prospect of the UK leaving the European Union. A Brexit working group has been working to ensure that the membership is properly informed about important developments with, for example, regular briefings about the large number of technical papers produced by the Government.

A briefing paper has been written on customs and ports issues, and the Government has been kept informed about the results of the regular Brexit surveys of the ICAS membership. We believe that this work is an important contribution to objectively informing the Brexit debate and the Government’s understanding of the implications for businesses in the UK.

During 2018/19 ICAS has been undertaking a full review of its own governance arrangements. We warmly welcome this initiative. A number of areas for positive improvement were identified, and the changes recommended in the review should be adopted over the coming year.

If the proposals resulting from the review are implemented, we believe that they will significantly improve the governance of the Institute which is essential to maintaining the confidence of members, other stakeholders and the wider public. However, it is recognised that governance is an evolving process and must be kept under periodic review.

Following wide consultation ICAS agreed a new syllabus format for students and employers. This will be introduced in 2020. Consideration is being given to delivering the CA qualification outside the UK, the design of a new qualification in the digital area and more use of online learning platforms.

The Syllabus revision will emphasize the importance of Public Trust and there will be a new final level Examination paper in Business Ethics. We strongly support the initiatives being taken by ICAS to give ethics a prominent place as part of the CA qualification.

We consider that the signing of a reciprocity agreement with the USA authorities brings the prospect of greater global recognition of the CA qualification.

A major programme to improve the Institute’s IT and digital services has been undertaken over the past year. A milestone in developing new systems has been reached on time and within budget. This is a very significant achievement.

ICAS recognizes that the investment will only deliver benefits if there are organisational and cultural changes within the organisation. We are encouraged by the commitment of the new chief executive and his senior team to making these changes happen. At the heart of all this good work must be the overriding goals of strengthening public trust and improving the services which ICAS can provide to its increasingly global membership.

The members of Council are responsible for preparing the Annual Report and Consolidated Financial Statements in accordance with applicable law and regulations.

Meet the ICAS team working to manage and promote the profession and train the next generation of Chartered Accountants.