With less than two weeks left until nominations close for this year’s Top Young CAs competition, we have spoken to two previous winners about why people should nominate themselves or a deserving CA they know.

The ICAS Top Young CAs competition is our annual showcase of the best and brightest CAs in the worlds of accounting, finance and business.

Opportunity to get your voice heard

To be recognised on the Top Young CA list is a fantastic opportunity to establish yourself as a leader in your field, raise your profile and promote your work to fellow CAs and beyond.

Hamisha Mehta, 2019 One Young CA, said: “The entire experience of Top Young CA 2019 was both really enjoyable and interesting. From the initial application, all the way through to ‘The Future Generation’ event, the competition allowed me to share my thoughts, opinions and experience openly with ICAS and help shape the future of the profession.”

“Almost two years ago, after listening to Jonny Jacobs talk on stage at my ICAS Admission Ceremony, I was encouraged to apply for the competition. The overriding benefit for me has been the opportunity to meet and connect with fellow CAs from all over the world - an invaluable and unrivalled opportunity”, Michael Scott, 2018 One Young CA added.

Chance to be named One Young CA

From the Top Young CAs list we will shortlist a selection of young CAs for the One Young CA competition, who then will be invited to further interviews.

The One Young CA will be awarded a top table invitation at the ICAS President's dinner, the chance to be a keynote speaker at our Admissions Ceremony and will be featured on the front cover of CA magazine.

For Hamisha, being named One Young CA came as a complete surprise: “I don’t think that I nor any of the previous winners of One Young CA ever expected to win the award. The process of application through to interview itself was so enjoyable, and I was so focused on it, that I didn’t think about what it would mean to win the title of One Young CA 2019 until it happened.

“Winning One Young CA 2019 has given me the confidence to pursue my passion for increasing diversity within the profession. It has also given me a platform from which to drive change and a network that can support me to do so,” she added.

“The experience of being in the 2018 Top 100 Young CAs, let alone named One Young CA, instilled a greater level of confidence and self-belief,” he explained.

The One Young CA will also have the opportunity to represent ICAS at One Young World, a global forum for young leaders from every country and sector. The annual One Young World Summit brings together the brightest young makers from around the world, empowering them to make lasting connections and develop solutions to some of the world’s most pressing issues.

For Hamisha, representing ICAS at One Young World was a life-changing experience that left her feeling energised, inspired, humbled and passionately motivated to make a difference in this ever-changing world.

“As One Young CA 2019, I had the honour of representing ICAS at the 10th Anniversary of One Young World in London. Throughout the four days, I heard from inspiring speakers from across industry and politics, as well as young people striving to make a positive change in the world.

Michael, who joined fellow young leaders from all over the world in The Hague in 2018 said: “I am grateful to ICAS beyond all measure for the opportunity to attend such a powerful and inspirational event. Without a doubt, it readjusted my perception on important issues and changed my overall outlook on life.”

“Each individual I spoke with brought with them an inspiring and passionate story. They were leaders, social entrepreneurs and change makers – I was honoured to meet them. It was truly an emotional experience.”

The competition gives young CAs the opportunity to engage with ICAS in new ways and network with fellow CAs. Several of our Top Young CAs have joined ICAS committees.

“As soon as you’ve received your qualification, it is all too easy to get busy with progressing your career and forget the prestigious institution that you are now a member of and the network of inspiring individuals and leaders that you have a connection with. Joining the Top Young CAs competition is a great way to re-engage with ICAS,” Hamisha said.

Michael added: “The experience itself was incredible; it will allow you to engage with the institute in a completely new way and develop a fresh enthusiasm for the CA qualification.”

Reflecting on your career

The nomination process gave Hamisha the opportunity to reflect on her achievements and how they might inspire other Young CAs both in their careers and outside of work. The process has made her consider what comes next, and how she can become a role model for the next generation of CAs. It also made her look at what her own role in shaping the future of the profession and ICAS could be.

She said: “For anyone considering nominating themselves or a peer, my advice would be do it now. You’ll personally benefit from reflecting on your achievements and expanding your network but that’s just the minimum. You have every chance of being named a Top Young CA or even One Young CA 2020!”

“I encourage CAs to put yourselves forward, and nominate others, for the Top Young CAs competition. Let's celebrate and showcase one another's diverse range of talents, experience, skills and knowledge across a range of sectors from all over the world,” Michael added.

Nominate yourself, or a deserving CA you know, today for the chance to be named on our prestigious and influential Top Young CAs list. 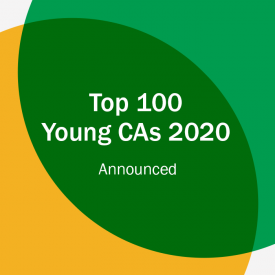