KPMG: the importance of mentors to women's careers

The first female Chairman and CEO of KPMG in the US, Lynne Doughtie, has advocated the importance of having mentors throughout her career.

Speaking at the World Economic Forum meeting in Davos, Switzerland in January, Lynne identified seeking out a mentor as one of the key pieces of advice she could give for success.

"In the early days for me as a young woman in a profession, there weren't as many female role models to look up to," she told Business Insider. "Mentors are there to listen and talk with you and give you advice which is really helpful."

Lynne began her career in KPMG's US audit practice in 1985 and has risen through a number of leadership roles since. She serves on KPMG’s Global Board and Executive Committee and recently oversaw record levels of growth as Vice Chair of KPMG’s advisory business.

Mentors are there to listen and talk with you and give you advice which is really helpful.

Now she is taking steps to encourage other women to aspire higher in their careers and to reach out to those just starting.

She said: "I think, especially as women leaders, we have to give [other women] confidence back and tell them 'you can do this' and, as a company, we are here to help you.

"At KPMG I want to remove any barriers that make women think they can't do that and I want to make them feel comfortable to ask for things."

The KPMG Woman's Leadership Study surveyed more than 3,000 professional and college women in the US in 2016 and found that the ability to network and converse with industry leaders was a key concern for career development.

A 67% majority of respondents said that they had learned the most important lessons about leadership from other women and 82% believed access to and networking with female leaders will help them advance in their career.

"One of the findings that was really revealing to me was the difference from when women start out in their careers to when they reach manager level," Lynne commented.

You need to get out there and tap people on the shoulder and ask for things, ask for someone to give you advice.

"When women are starting out in their careers they tend to be confident and look to aspire to leadership roles and really want those positions. But then over time, as they advance, they become less confident and don't think they can attain those roles."

A mentor can offer rare insight and an outside perspective on any stage of your career, lending experience and expertise to your continued professional development.

"Another thing the survey showed was that there was even hesitancy from women to look for a mentor. You need to get out there and tap people on the shoulder and ask for things, ask for someone to give you advice," said Lynne.

Career Connections is the new ICAS career-mentoring platform. It enables relationships between ICAS Members, connecting prospective mentors and mentees, no matter where they are in the world, with the ability to message, set up and host either online or in-person meetings.

Other mentoring opportunities from ICAS

Career Mentoring is not the only fantastic mentoring opportunity provided by ICAS. The ICAS Foundation, which aims to support academically talented young people into university, offers mentoring opportunities for CAs. All ICAS Foundation mentors will be supporting students or school pupils who want to go to university to study accountancy or finance.

ICAS is also keen to support business growth through our business mentoring programme; giving our membership access to an experienced mentor who can provide valuable support to those starting out or seeking growth. 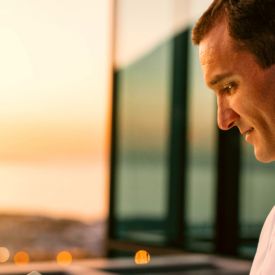