Lawrence grew up north of Dundee in a town called Kirriemuir – famous for being the home of Peter Pan. He moved to Glasgow in 2008 and graduated from University of Strathclyde in 2012 with BA(Hons) in Accounting & Finance. Following this, Lawrence moved to France and completed his MSc in Corporate Financial Management at the Lille campus of Skema Business School which he graduated from in 2013 as Major de Promotion (aka valedictorian).

In 2013 Lawrence joined Deloitte Aberdeen in their Audit practice and completed his training contract in 2016 shortly before joining Deloitte Calgary in their M&A Advisory team. He gained admission to ICAS in early 2017 and is keen to make the most of his ICAS membership while hoping to make it easier for other members to do the same.

Outside of work, Lawrence enjoys spending time in the Rocky Mountains that are on Calgary’s doorstep with snowboarding, skiing, hiking, canoeing and camping being the mainstays of most of his weekends.

Graham grew up predominantly in Aberdeen aside from completing his GCSE's in Singapore, before returning to Aberdeen to finish school. In 2006 he moved to Glasgow to study Accounting and Finance at the University of Strathclyde, graduating in 2010 with a BA (Hons) and returning to Aberdeen where he started his CA training at Hall Morrice LLP. After being admitted as a member of ICAS in October 2013 Graham made the move to Industry and in October 2016 was given the opportunity to move to Calgary through an inter-company transfer. He moved to Canada in January 2017.

Outside of work Graham enjoys exploring the Rocky mountains and Hiking with his wife. He also likes to sneak in a game of golf whenever possible. 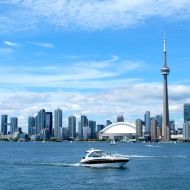 ICAS members regularly meet up in Canadian cities and online to network, share inspiration and advice.