New tech for a new world

With each passing year, the skills powering the technology and finance sectors become ever-more closely aligned. Nick Huber speaks to four CAs who have seamlessly made the transition and are now taking the tech sector by storm.

These days, it feels like technology informs every aspect of our lives. Whether it’s the way we work, travel, shop, relax or socialise, every facet has been transformed by the seemingly exponential speed of innovation. Got a problem? Well, if there’s not already an app for that, someone is almost certainly working on one.

As technology has evolved and proliferated, a similar blurring of boundaries has taken place in professional services. Many of the skills accountants possess – financial analysis, business knowhow, strategic understanding – are in hot demand at tech companies. The two sectors appear to have a shared understanding of what it takes to succeed in business.

We spoke to four CAs who have established themselves as ones to watch in this space. All have joined the workforce in the past 15 years – and all are now executives with ambitious young digital disruptors. These tech trailblazers tell us why they decided to make the leap.

Having spent a decade with PwC, Christine Weddell CA thought she might well remain with the Big Four firm for the rest of her career. It was a surprise, then, when fledgling HR software provider Topia contacted her about a job opportunity in 2015. At the time, she was working in PwC’s mobility practice, advising companies on managing a global workforce, and she initially took some persuading to make the leap outside of her comfort zone.

“At first, I thought it was too risky because it was a start-up, but we had a huge number of interviews and meetings before joining,” she says. “Everyone I met as part of the interview process was so passionate about the company and the industry it was trying to disrupt. I knew that if I didn’t do it, I would regret it.”

Weddell is glad she trusted her instinct: “In the last five years, I’ve probably learned more than I did in the first decade of my career in terms of building a business, customer service and thinking on my feet. Th at maybe because I have been working for a start-up, which makes decisions quickly.”

In February 2020 she moved again, joining MWS Technology, which creates technology for vocational training, including apprenticeships. “No two days are the same,” she says of the new role. “I enjoy the fast pace of work. In tech, you are trying to be innovative – you have to be prepared to take a risk and it’s more accepted that things can go wrong. You have more of an opportunity to discuss and learn from your mistakes.”

As the COVID-19 pandemic began to escalate, Weddell and MWS had to apply quick thinking in helping clients to move their businesses online. Previously, most training was done in classrooms. Now the entire apprenticeship process can be managed online, with learners onboarded remotely and training delivered through webinars or pre-recorded content.

“All training providers have had to consider how they can deliver effective training remotely. Remote delivery (via technology) is therefore at the forefront of all training providers’ minds as they look to prioritise this change in delivery approach,” Weddell notes. “This presents us with a huge opportunity to work with many organisations including those that perhaps wouldn’t have quite been ready to make the shift to remote delivery.”

It’s this quick and agile thinking that Weddell enjoys in her role as COO. “You need to be a good all-rounder, because operations is involved in every single function of the business,” she says. “It’s challenging at times but it gives me great variety and a huge opportunity to learn about all aspects of the business.”

Ken Donald CA joined the workforce as part of the Royal Bank of Scotland’s finance graduate scheme in 2007. While the industry was just beginning to feel the first shocks of what would become the great crash of 2008, it was also the start of the boom in financial technology, or “fintech”. Start-ups had begun using apps, algorithms and technologies such as AI to challenge traditional banks and insurers. “The UK banking industry was changing fundamentally,” recalls Donald.

Having moved to Virgin Money in 2014, Donald began thinking there was a “huge opportunity” for a “consumer champion” in banking and financial advice. Last year, he co-founded Snoop alongside former Virgin Money colleagues. The app works to save customers money by tracking their bills and using machine learning to provide “hyper-personalised recommendations”. Customers can connect the app to their bank accounts, credit cards and utilities, giving an overview of their finances.

“Our app is a bit like an Instagram or Pinterest feed for your money,” explains Donald. “Other companies allow you to connect all your accounts together but I haven’t come across any which provides the information we do. We use artificial intelligence and human intelligence.”

He adds: “There is a huge opportunity for Snoop to put money back in people’s pockets. Having recently launched, it’s all about scaling quickly for us. We can see opportunities to extend our consumer offering, as well as moving into SME and international markets.”

Donald, Snoop’s COO, primarily focuses on company strategy. His CA training means he is “fluent with numbers” and able to absorb financial data and grasp the regulatory landscape.

Advances in technology and regulations such as Open Banking – which requires UK banks to let customers share their financial data with other companies, including those in fintech – are continuing to disrupt financial services. Snoop wants to “marry” finance and technology and use the power of data to create much better outcomes for consumers. Donald explains: “Data doesn’t belong to big business; it belongs to individuals.”

At the age of 25, a time when many young graduates are still getting their feet under the table of their first post-university job, Gareth Lewis CA was already starting his own tech company, Delio, which produces software for the financial sector. Launched in 2015, the South Wales-based firm now has 65 employees and counts around 200 companies as clients.

Lewis, who trained as a CA with EY, started Delio after spotting a gap in the technology sector for private investment. “We recognised that wealthy investors at wealth management clients and big financial services firms are looking to invest in private markets and diversify their investment portfolio,” he recalls. “But they often didn’t have the technologies or tools to access, research and close the private investment in the most efficient way.”

Contrary to the common view of fintech as a challenger to traditional financial service firms, Lewis sees it as an “enabler” that helps them to reduce paperwork and get better “insights”. “Often, when people hear fintech, they think of AI and see it as something that could replace humans,” he says. “Yet there is a lot of technology that is designed to support and enhance traditional financial services.”

Lewis sees the ongoing pandemic as an accelerator of change in the sector: “COVID-19 has brought hurdles to the finance industry, but it has also pushed many companies to adapt. For many of the institutions we work with, this has been a wake-up call. They recognise that going digital and embracing technology can help them to connect with their clients at all times.

Since the global lockdowns began, we’ve been in touch with a lot of businesses who want to adapt in this time – many of them see technology as a solution that helps them accelerate their private-markets propositions. It’s allowed finance to rethink their strategies and amend some of the existing rigorous processes that would delay their decision making.”

For Lewis, even more than working in the fast-paced tech sector, the biggest buzz is running his own business: “It’s much more difficult than you expect it to be as there are so many more things to deal with daily. It can be a bit more of an emotional rollercoaster but I wouldn’t change it for the world.”

Josh Harris CA always dreamed of setting up his own business – and he didn’t have to wait long. After graduating from university in 2015, he began his career at a Big Four accounting firm. It offered useful experience and training, but could never satisfy his itch to go it alone.

“My father said to get qualified first, before starting my own business,” he says. “I didn’t want to get stuck in a Big Four firm, although they are great firms to work for. During my EY training contract, I used my commuting time between Clapham and London Bridge to think of an idea for a new business.”

In 2018, Harris and his brother created software company Doc2, making products that enable SMEs to create contracts quickly from templates and have them signed electronically. The creation and signing of contacts can be 75–90% quicker using its software, he says: “There is no manual editing of a Word document or risk that you can delete or change things that shouldn’t be changed. Our online forms allow businesses to create their standard contracts within seconds.”

A fortuitous coincidence was that Doc2 started life the same year as the General Data Protection Regulation (GDPR), which gives consumers more control over personal data.

“Security and data privacy, especially when dealing with contracts, are paramount,” explains Harris. “With the advent of GDPR, this has been at the forefront of tech businesses for a while. We are lucky that Doc2 was developed in a GDPR environment from the beginning, making implementation significantly easier.”

Having now achieved his goal of creating a business, Harris acknowledges that the work has only just begun: “During the last 12 months, our biggest challenge has been building trust in the platform as we are a relative newcomer, but also dealing with such sensitive documents.

“Growing the company from 100 to 1,000 customers is so different to growing it from one to 10 customers. I’m having to learn different ways of doing the marketing and closing the sales and changing the messaging to customers.” 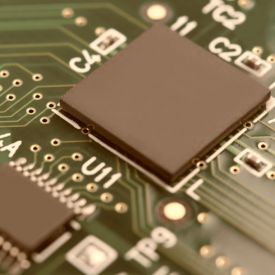